*It’s always rewarding to know that our Black girls and young women all over the world are being assisted, encouraged, supported and empowered. Living in a country like America, where so much is possible, and opportunities are within reach for those who dare to dream, its often easy to forget that this is not the case in other countries around the globe.

That someone would actually take the time to not only acknowledge this truth, but work to change it, so that girl in other parts of the world can hope for a better life and greater future, is more than commendable. It has been 10 years since media mogul Oprah Winfrey opened her Leadership Academy for Girls just outside Johannesburg, in 2007. As recognized in an article by Variety , the boarding school — Winfrey reveals costs her approximately $140M to keep afloat — has since gone on to change the lives of hundreds of students in grades 8-12.

In starting the Academy, Winfrey said, ?My hope was that I would give them an opportunity to see the best of themselves reflected through an open mind, an open heart, to what is possible. ?And I can honestly say I have achieved that.?

But there is another foundation doing incredible work on behalf of girls and young women in Uganda. Just Like My Child, a foundation that may not be as well known. It’s founder is not a celebrity — she’s not even Black. What she is, is a woman who wanted to have another child and got 10,000 instead.

Vivian Glyck had suffered two back-to-back miscarriages and didn’t know what to do. But one day in 2006, while sitting at a stop light, she had an epiphany.

“I was sitting at a stop light and I just started to cry. And I thought to myself, ‘OK God, what am I supposed to be doing?’ If not this, then please point me in the direction. And it just became clear to me that rather than pursuing having another child what I really wanted to do was have 10,000 kids.”

In a video on the Just Like My Child website (scroll down) Glyck movingly speaks of the moment this realization came to be. We see her being surrounded by a group of very happy and excited Ugandan children.

These children are just like my child. –Vivian Glyck

Born and raised in New York’s Spanish Harlem, Glyck grew up in poverty. She experienced both domestic and sexual abuse as a child of parents who were Holocaust survivors.

In the video, where Glyck speaks of her past, she says it was one particular teacher, a mentor when she was in 11th grade, that encouraged her to stand up for herself.

That teacher who took the time to care about a young girl student may not know that her compassion and education would go on to serve as an outline to shape Glyck’s life as an advocate for girls.

But the real moment of realization came for Glyck when she witnessed a what happened after a colleague escorted a group of about 19 girls outside of a classroom to explain what sexual abuse is. The woman, named Monica, then asked anyone who had ever experienced abuse to raise their hands 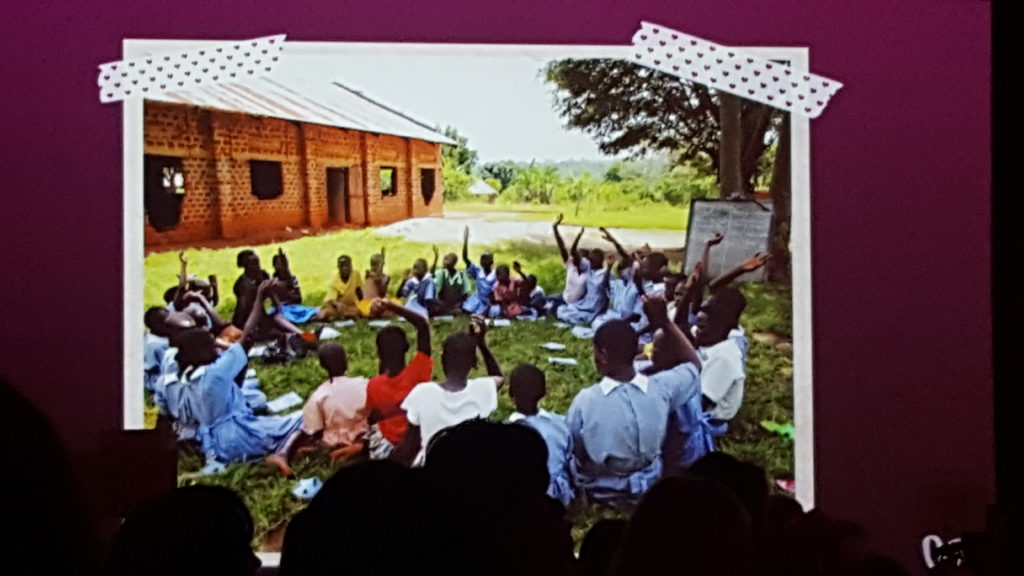 EURweb senior editor, DeBorah B. Pryor, captured this photo from a video presentation at the Gala. It shows the girls who had experienced sexual abuse raising their hands.

“When I saw that I knew how lonely those girls felt. How isolated they felt. And how they were enduring this happening to them in the darkness.”

The Just Like My Child Foundation has delivered healthcare services, education, micro-enterprise, social justice, leadership and empowerment programs to over 200,000 individuals (primarily women and children) in 76 rural communities in Central Uganda and Senegal since its 2006 inception.

And such compassion has not gone unnoticed by some of Hollywood’s most powerful women. When actress and humanitarian Jada Pinkett-Smith (Girls Trip) learned of the foundation, she immediately wrote a check for $15,000. Regina Hall (Girls Trip) has supported the foundation for years and for at least the past two, has hosted their annual gala. The Girls Trip star was a real hoot in doing so! And this year, three-time Oscar nominee, and Academy Award winner Viola Davis (The Help, Fences) was honored as the Foundation’s 2017 Global Humanitarian. 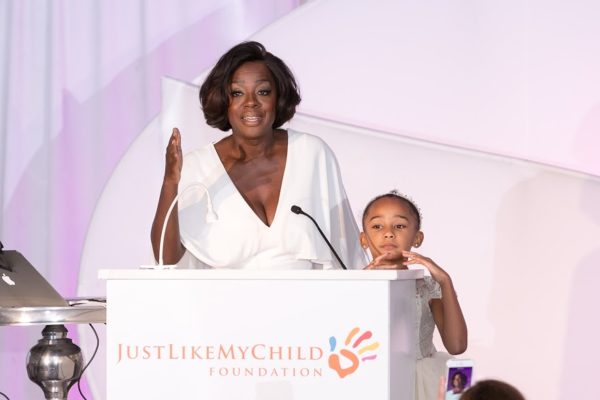 But the event of the evening had to be the introduction of 17-year-old Nabatanzi Joan, a young woman who has been a part of JLMC since 2017. Beautifully made up and as this writer can attest to, was doing red carpet like a pro, it was hard to believe that Joan was once so shy she could not speak in front of anyone. She spoke so eloquently in front of this audience of hundreds about how grateful she is to the Just Like My Child foundation, and Glyck in particular.

?Before, I was so shy I couldn?t even speak to people. Now I can speak to people freely and I?m assertive. I make sure that that person understands me well. I learned how to protect myself. I learned that I should not be violated and I should have my human rights respected.? ? Nabatanzi Joan, at age 14

Take a listen to Joan’s story in the JLMC video below.

Below, author Terry McMillan, whose book, How Stella got Her Groove Back was made into a movie, poses here with Vivian Glyck and a friend. 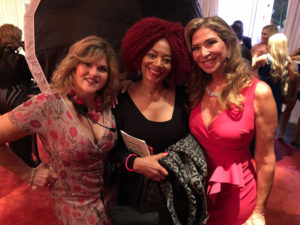 JLMC has several empowering projects under its helm including the Girl Power Project, Project Injustice, The Mandela Project and more. In 2015, several of JLMC?s pioneer programs began graduating into self-sustainability and independence from the need for further financial assistance.

The aforementioned Gala raised thousands of dollars going towards the work of the Foundation. A few of the numerous and awesome auction items included…

A Viola Davis hosted private visit to the set for 4 people, a one night stay at the SLS Hotel with dinner for 2 at Tres Restaurant, and a session with celebrity makeup stylist Matthew Preece.

8 lucky guests get to visit Italy and stay at the 800-year-hotel, La Dolce Vita 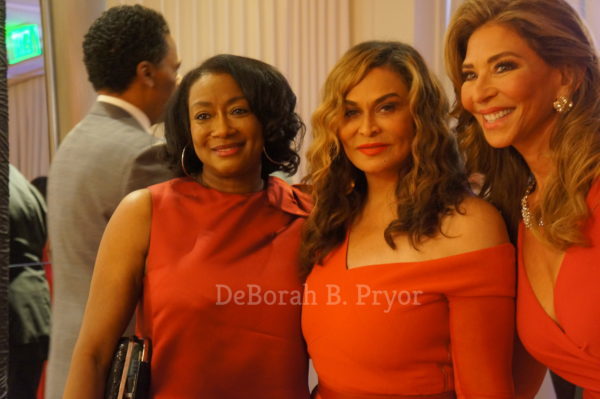 …And this is how it all began. Vivian tells her story in the video below.

Want to know more about JLMC? Visit their website here. Want to go to Uganda? Once a year founder Vivian Glyck makes the trek. Here’s how you can join her. Want to donate to JLMC or start a campaign? Click here. 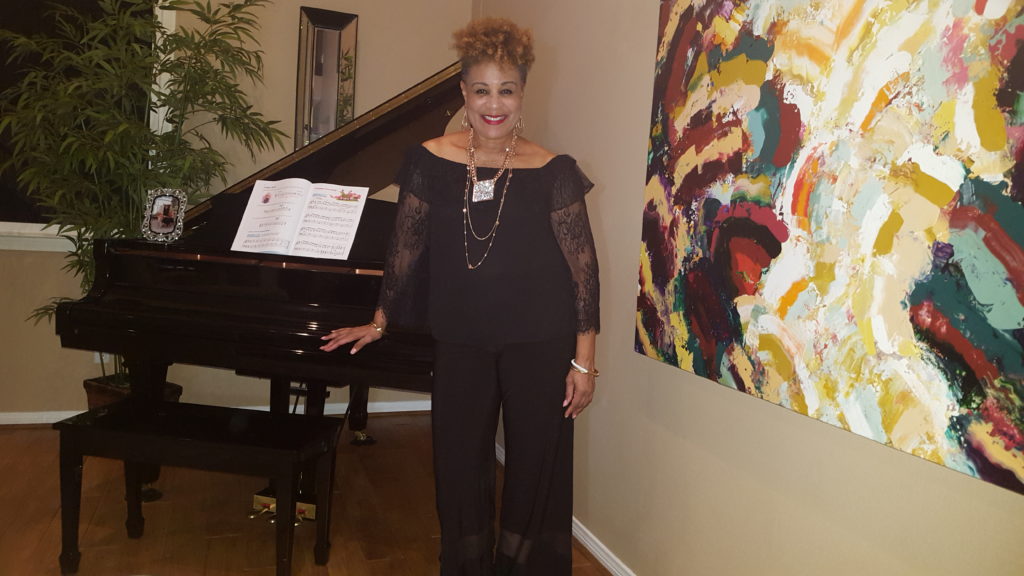 DeBorah B. Pryor has been with the Electronic Urban Report (EURweb) since 2003. Today, as a senior editor at the site, her features mainly include celebrity interviews, theatre and new book reviews. She is also the editor at EURThisNthat, the daily news blog site for EURweb. Over the past 2 years she has driven for the Uber ride share service and recently completed her first nonfiction book, AREN?T YOU SCARED: Lessons from a Lady Uber Driver, which will soon be available in eBook and later in print at major book stores around the country. Follow DeBorah @ pryor_deborah on Facebook and LinkedIn at DeBorah B. Pryor.