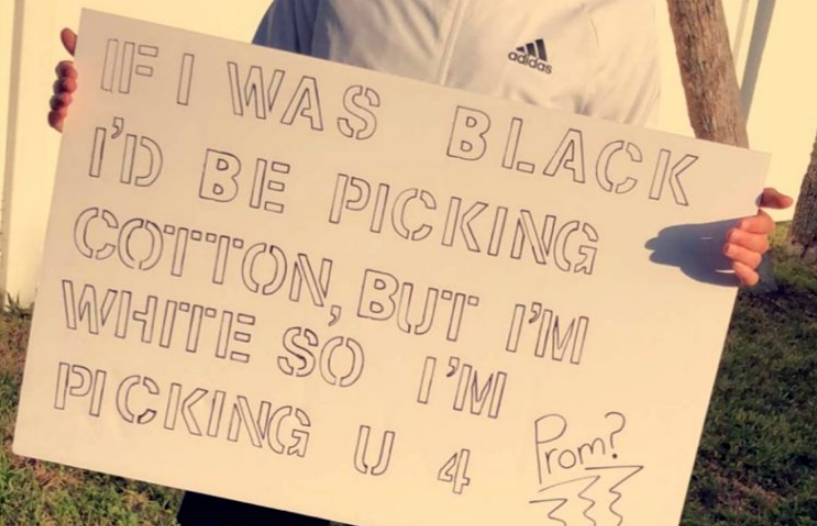 According to the Herald-Tribune 18-year-old Noah Crawley of Riverview High School in Sarasota held up a sign that read ?If I was black I?d be picking cotton, but I?m white so I?m picking U 4 Prom?? END_OF_DOCUMENT_TOKEN_TO_BE_REPLACED 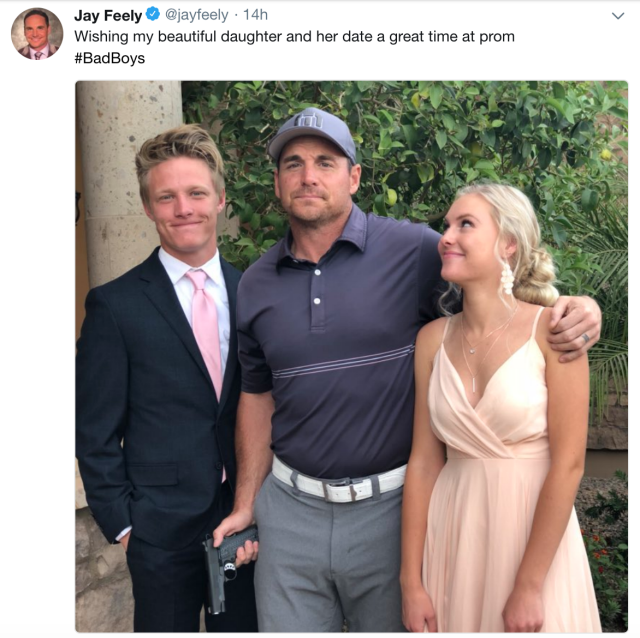 *Let’s just file this under This Ain’t Cute…at ALL! Every girl dreams of going to the prom (well almost! I didn’t); and one day, they’d probably like to look back at the pictures that was taken. Pictures showing them and their date dressed to the 9s just before waving goodbye to her mom and dad; and photos taken during and after the big night.

Of course dad has given you “the talk” and your date the side-eye, but he doesn’t appear to be too threatening.

Uh, I take that back. Yes he does.

Instead of posing for the typical dad-daughter in a prom dress pic, Former NFL kicker Jay Feely decided to add his own brand of extra.

Feely thought it would be uh…I don’t know why the hell he thought a picture of him, his daughter, her date and A GUN would be a good look!

Some folks just have the weirdest sense of humor.

Feely tweeted: “Wishing my beautiful daughter and her date a great time at prom. #badboys”

Y’all know people tripped all over themselves on social media, posting their opinions.

Hell, I’m typing emotionally (aka too damn fast) trying to share mine!!!! END_OF_DOCUMENT_TOKEN_TO_BE_REPLACED 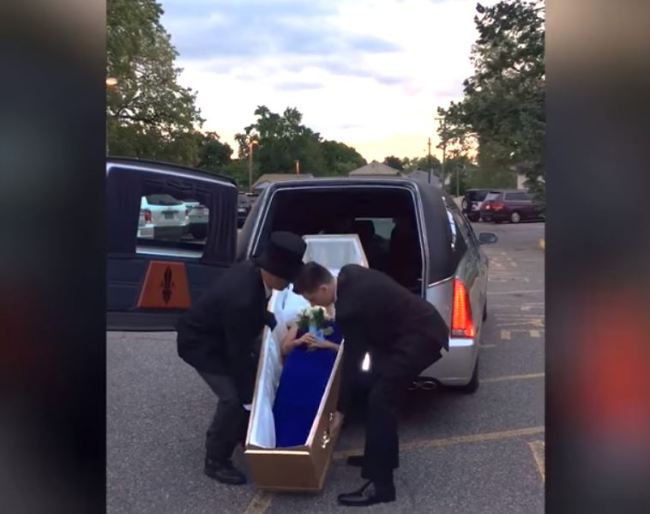 *Teenagers, you’ve gotta love ’em right? Think back, remember all of the crazy stuff we used to do as we tried to find our identity? Or just plain get attention? I put a gray streak in my hair, wore clothing from different cultures (my favorite being Indian), put a ring in my nose and two in one earlobe. Now, go figure — all of these things are the norm.

But this teen has got us all beat. She chose to show up to prom not in a badass dress; not wearing some outlandish hairpiece; not even on the arm of the hottest guy in school (like I did!). She showed up solo…IN A COFFIN…and you can only guess what her mode of transportation was right?

I’ll give you a sec.

You got it, a hearse. END_OF_DOCUMENT_TOKEN_TO_BE_REPLACED

*Can we be real here? This is an issue many of us aged folk never thought we’d have to deal with; but many families will now be faced with how to handle it. While my high school senior grandson is still trying to figure which girl he will ask to the prom, and many girls are gossiping about what boy they will let take them, one teen girl who wants to take her girlfriend  to prom has been shut down…

Paula Goodgame and her girlfriend, Anjali Persad, have been dating for four months. Goodgame is new to the school and was not aware of a school policy with specifics on who they can (and can not) bring to the prom. According to those guidelines, persons hoping to bring guests from another school must submit a “Prom Guest Request Form” with signatures and a picture ID.

Goodgame is a junior at  St. Petersburg Catholic High School, and her girlfriend goes to a private school nearby. So when Goodgame the request form asking permission to bring a guest from another school, it was denied.