*It’s that time again! The Los Angeles Women’s Theatre Festival (LAWTF) has been doing its thing for the past 25 years — presenting solo women artists from around the globe, showcasing their one-woman performances. As part of the Annual Festival there is also an assemblage of workshops, where professionals share insight on the process of becoming solo artists and more.

As part of this year’s workshop schedule,  celebrated director-writer-performer, Jessica Lynn Johnson will host the two-hour class The Art of Creating the One-Person Show. The workshop will show you how to create YOUR solo performance vehicle!

…and you can get this information for FREE! END_OF_DOCUMENT_TOKEN_TO_BE_REPLACED

*Ladies, you’ve worked hard to hone your craft. You’ve been performing for years and finally, you stepped out and developed your own theatrical piece. Moreover, you’ve performed it for small crowds on a number of occasions and much to your delight…they loved it.
If this sounds like you, the Los Angeles Women’s Theatre Festival, now in its 25th year, would love to meet you. Who knows, after their panel of professionals get a look at your video performance…they may love it too!
RELATED: Two ‘Splendid Performances’ Close Out 24th Anniversary of LAWTF
But you won’t know if you don’t submit. Don’t listen to that ‘negative’ voice in your head. Go! Get your stuff together. Send it in! The countdown is on towards their extended October 1 deadline.
#nothingbeatsafailbutatry
See the submission guidelines below and go for it!
…and good luck!

END_OF_DOCUMENT_TOKEN_TO_BE_REPLACED

LAWTF marks 24 years of producing well over 500 extraordinary multicultural and multidisciplinary solo performers from around the globe. END_OF_DOCUMENT_TOKEN_TO_BE_REPLACED

*The Los Angeles Women’s Theatre Festival offered ‘Taking Flight’ as the theme for the 24th Anniversary Festival. The opening night Champagne Gala, aptly named Standing On The Shoulders Of, honored six extraordinary women, and was co-hosted by stage and film actors Ted Lange and Hattie Winston. The event took place at the Barnsdall Gallery Theatre in Hollywood.

Awarded on this evening were women who are somehow involved in the business of entertainment. Presented with the “Eternity Award” was beloved local vocalist Barbara Morrison; Megan Cavallari with the “Integrity Award,” and Paulina Sahagun with the “Maverick Award.” Two women were honored with the “Rainbow Award” — namely, Estelle Campbell and  Leslie K. Johnson; and finally, the “Infinity Award” was given posthumously to Doris Roberts.

Returning again to offer her incredible talent for the evening was Eloise Laws.

The four night event, which runs Thursday night through Sunday, offered diverse performances by eighteen women from all over the globe doing excerpts from their solo plays. END_OF_DOCUMENT_TOKEN_TO_BE_REPLACED 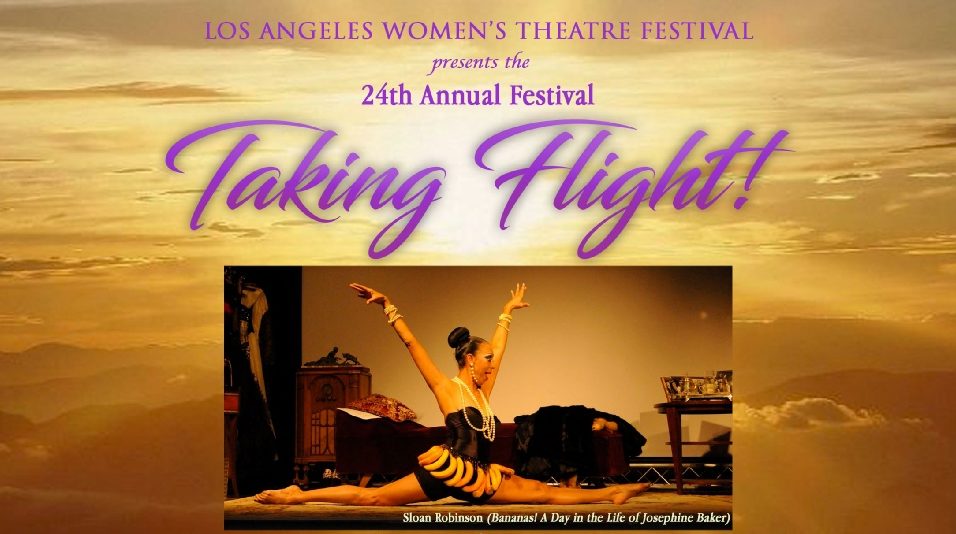 *The Los Angeles Women?s Theatre Festival (LAWTF) marks 24 years of producing close to 500 extraordinary multicultural and multidisciplinary solo performers from around the globe.

The longest-running annual solo festival for women in Los Angeles, LAWTF will take place March 23-26, 2017 at the Barnsdall Gallery Theatre in Hollywood  and at the Electric Lodge in Venice.

The Champagne Gala and Awards Ceremony on March 23, 2017 will be held in honor of exceptional women who have made laudable contributions in theatre. This will be held at Barnsdall Gallery Theatre in Barnsdall Park, 4800 Hollywood Blvd., Hollywood, CA 90027. There is free parking onsite. Following the reception at 7:00 p.m., the festivities continue at 8:00 p.m. with the presentation of the Integrity, Eternity, Rainbow, Maverick and Infinity Awards to distinguished women. (Integrity Awardee- Megan Cavallari; Eternity Awardee- Barbara Morrison; Rainbow Awardee- Estelle Campbell; Rainbow Awardee- Leslie K. Johnson; Maverick Awardee- Paulina Sahagun;  and posthumously, Infinity Awardee- Doris Roberts.

The theme of the Opening Night Program on March 23 is STANDING ON THE SHOULDERS OF?. The evening will be directed by Adleane Hunter and hosted by Hattie Winston (Becker) and Ted Lange (The Love Boat).  Back by popular demand will be award-winning vocalist Eloise Laws. There will also be a performance by emerging vocalist Payton Aurora Jones. END_OF_DOCUMENT_TOKEN_TO_BE_REPLACED

*(Hollywood) During this time of gratitude, the Los Angeles Women’s Theatre Festival (LAWTF) thanks those who have contributed to their 2016-17 Kickstarter Campaign.

As they gear up for their 24th Annual Festival, “TAKING FLIGHT” they welcome 18 phenomenal women performers who will share their stories through dance, theatre, song, spoken word and laughter. Some of these performers will come from as far away as London and Israel to be a part of this magical event.

It can be done!? It must be done!?Otherwise, they stand to lose all of their contributions from those who have pledged thus far.?

If you have not become a backer yet, they hope you will do so today? END_OF_DOCUMENT_TOKEN_TO_BE_REPLACED