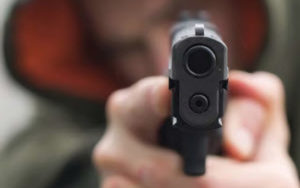 *But you’re not black. Remember? We only kill black people.” You may recall these cringe-worthy words spoken by a veteran Georgia police officer at a traffic stop. A white woman that had been pulled over for a DUI had expressed fear towards the cop, who’d told her to “use your phone.” She said she was afraid to put her hands down to do so because of all the cop shootings she’d seen. In  order to make her trust him or feel better he said the words that at first placed him on administrative leave; but later got him fired.  Of course, the only reason we know about the exchange to begin with is because the jackass said it on camera. His own dash cam caught it.

“Of all the videos you’ve seen, have you ever seen a white person get killed?” he asked.

Allow us to refresh your memory on the incident here.

We thought it might be interesting to explore the officers question to the woman, by sharing six incidents that had a white person pointing a gun at a cop, and managing to not get killed.

1. Armed White Guy Has Standoff With Police, Then Gets His Gun Back

Last May, an armed Michigan man had a standoff with the police as he stood in front of a Dairy Queen waving a loaded rifle around and angrily shouting. When cops arrived, the man, Joseph Houseman, refused to identify himself, grabbed his crotch, flipped the bird, and cursed them out. Houseman was intoxicated and didn?t have an ID. For 40 minutes, the police tried to get the belligerent man to put his weapon down. All the while, he was screaming, ?The revolution is coming,? and accusing the cops of being a ?gang.” He told the police he had a legal right to “threaten” police officers and their families.

Excerpt from their encounter:

POLICE: No it’s not. You can’t swear.

HOUSEMAN: That’s bullshit. I can threaten you if I want to.

POLICE: You said a war was coming.

HOUSEMAN: I didn’t say a war was coming.

POLICE: You said a revolution is coming.

HOUSEMAN: Think about it. You know it is.

When Houseman refused a Breathalyzer test, officers decided not to give him his gun back. Instead, he was told to come to the police station and claim it the next day. He did, and his gun was safely returned.

In the video below, duration 10 minutes and 23 seconds, white privilege is clearly exemplified as an elderly Caucasian man is standing in the middle of the street holding an assault rifle. Calls have come into 911, and police are on the scene. But here’s the kicker. They are actually talking to the man in an empathetic kind of way. An officer even says, “I’m not here to shoot you, man,” after the rifle-toter, who has been grabbing his crotch and making all kinds of lewd actions, asks him if that’s what is going to go down. The comment is around the 3:55 mark

In August, a San Diego man got out of his parked car with a loaded 9mm pistol and proceeded to point it at police officers and small children who were playing in a local park. The police proceeded to spend the next hour trying to talk the man, Lance Tamayo, into putting down his weapon.

In case you blinked, let’s repeat that: The police are heard “Trying to talk to the man.” Unlike their dealings with Black people, where they have killed first and asked questions later.

The terrified children were forced to hide in the bathroom as Tamayo rushed toward the officers with his weapon pointed at them and the police helicopter flying overhead.

Eventually, an officer shot Tamayo once in the stomach to put him down. He fell to the ground, but his gun remained within reach. The police then called Tamayo on his cell phone and spoke with him for 15 minutes before he agreed to surrender. He was arrested and charged with exhibiting a firearm in the presence of peace officers.

The video below is from The Advise Show, a YouTube program. Phillip, the shows host, takes us through what is happening on video before he reads a post from one of the shows social media subscribers.

The woman identifies herself as a 37-year-old white woman who was married to a Black man that was murdered five years prior. The woman, who is responding to the video (shown directly below) reveals her fear in raising the two Black men fathered by her deceased husband.

Here is the video about the story above.

3. White Man Arrested Twice For Road Rage With a Gun

In October, a Tennessee man was arrested for waving a loaded gun during a road rage incident involving another man and his son. E.J. Watson confronted the pair when they came to a stop, exited his vehicle with his pistol tucked in the front of his pants and was very belligerent, cursing and making derogatory remarks.

The victims called 911, and police pulled Watson over a few miles from the weapon-wielding episode. His car was littered with empty beer cans as well as a loaded Smith & Wesson revolver. Watson refused to exit his vehicle and had to be physically removed. Only three months earlier, he was arrested for a separate drunken road rage incident.

Good thing for Watson he was white?otherwise he might not be alive today.

No video for that one.

4. Two White Men Shoot Up Walmart With BB Gun and Live to Tell the Tale

Two Idaho men were taken into custody after shooting up a Walmart with a BB gun. Both were intoxicated. They walked into the Post Falls Walmart and proceeded to remove BB guns from boxes, before loading one and firing it four times while in the store. Walmart security contacted police, saying the two men ?started shooting the gun in the store and made comments that they were going to shoot the store up.? According to one Walmart employee, the drunken men approached him and asked if he wanted to join them in their shooting spree.

The two white guys were taken into custody without incident, instead of being shot and killed on the spot.

However, on August 5, John Crawford III was shopping at a Walmart in Dayton, Ohio when he picked a BB rifle off the shelf from the sporting goods section. As he walked around the store fiddling with the gun and talking on his cell phone, another shopper called police to report a black man carrying an AR-15 assault rifle. The shopper told police that Crawford, ?looked like he was going to go violently.? Crawford was shot and killed by police while in the store.

On the 911 call, the dispatcher can be heard saying ?Walmart, a black male, six foot, wearing a blue shirt, blue pants, in the ?section, holding a gun, pointing??

There you have it: in two incidents involving men carrying BB guns in the same chain store: the white men were arrested and the black man was killed.

Here’s the final video to accompany that story.

These amazing, yet true, stories were compiled by Harmon Leon for AlterNet. You will find these along with 4 more stories on the subject on their site.

As they so aptly state: White guys get arrested, Black guys get shot in similar cases.

*Damn David, you’re my favorites, but WTF? ?If you’re a magic buff like I am, you no doubt know who David Blaine is. Blaine is the amazing illusionist and endurance artist who never wasted time on stupid card tricks. No, he started off blowing folks’ minds levitating; doing crazy things like walking on water (no offense, Jesus), being buried alive and even hanging upside down for 40 hours. He definitely thinks out of the box, But this time he went too far and almost killed himself. He shot himself in the mouth.

I’ll give you a minute to absorb that.

You a’iight? Due to extreme luck, or whatever you may choose to call it…so is he.

Blaine’s stunt actually went wrong during his Beyond Magic show last November. But it was only broadcast on E4 on Saturday night during a clip showing him spitting frogs out of his mouth into the audience.

Yeah, he can be pretty gross too. END_OF_DOCUMENT_TOKEN_TO_BE_REPLACED