*Churchgoers in Anderson County, S. C. saw something they will never be able to un-see on February 6. They witnessed Kaylee Muthart, 20, use her bare hands to actually tear her eyeballs out.

People say that the woman was hallucinating at the time of the incident. She is healing now, but she will be blind for life.

According to authorities, Muthart was beside herself.

?It took two or three of our guys and two EMTs? to subdue her enough that she could start receiving medical assistance, Sheriff Chad McBride of the Anderson County Sheriff?s Office said.

Now her family is using their misfortune to warn others about the risks involved in illegal drug use. According to Katy Tompkins, Muthart’s mother, it was hard to hear the diagnosis that her daughter will never see again.

?That was a struggle, I can?t even explain that feeling when I found out, it was horrifying. Complete terror,? Tompkins told People. ?I was thankful she was alive, but I knew something was wrong with her.?

Tompkins is speaking out in the video below, warning people about the drugs they take, and the people they hang around with who do drugs.

Doctors believe Muthart may have used methamphetamine laced with another substance which caused her to hallucinate.

Tompkins said Muthart believed ?the world was upside down? and she ?heard voices that told her to sacrifice her eyes in order to make it to heaven.?

Scroll down to watch the FOX Carolina video report and read more at Fox News.com

Consider yourself warned. The story  story contains graphic content that some readers may find disturbing. You like sushi? Well you might reconsider that after reading this story about a man who blames the 5-1/2 foot tapeworm that dangled from his body on his diet.

The Fresno man said he loves the raw fish so much, he eats it every day.

This is how it all started.

A few months ago the man visited an emergency room complaining of bloody diarrhea. He was seen by Dr. Kenny Banh, a UCSF Fresno Emergency Medicine Physician, who remembered the man had an unusual request.

“He asked me for worm treatment and I was like, oh, not an everyday request.”

Skeptical about patients who self-diagnose, the doctor said the man was adamant about his symptoms. He had gone to the bathroom, experienced the diarrhea, and thought he felt something “dangling” from his rectum. END_OF_DOCUMENT_TOKEN_TO_BE_REPLACED

*Women BEWARE of those trending eyebrow tattoos! You might end up looking like Amanda Coats — who is not only brave enough to show you how horrible her experience turned out; but compassionate enough to do so, so that no one else has to go through what she endured.

But get this. Whew! Let me take a breath first because I am fuming on her behalf.

The salon has the AUDACITY to be suing her for calling them out. Yes, you read that correctly.

Here’s how it all started.

Last July, 43-year-old Amanda Coats went on Facebook to share how an eyebrow feathering appointment at the Point Cook Skincare Laser Clinic in Melbourne turned out. She said it left her ?scarred for life? and with $1,600 in medical bills.

The pictures she uploaded went viral. No surprise there!

Now, Batulzii Cleveland, the cosmetic tattooist, and the store is suing her because they have lost clients.

Isn’t this un-freaking-believable? And wait! She simply outed them. She didn’t even SUE them!!!

They filed a writ in the County Court seeking more than $150,000 in compensation from Coats; saying lost 11 clients as a result of Coats?s putting them on blast, and claims it has cost them $5,600 ? and that the tattooist has been subject to ridicule.

Oh god. Hold me back!

This happened in Australia. It’s a good damn thing because had it happened in America, where our behavior is different to put it mildly, the outcome would’ve been quite different.

Iain Cleveland, the owner of the salon, said Coats was ?delighted? after her appointment.

Consider this fool. AFTER the appointment, on THAT day, she probably was.

Cleveland said the clinic didn?t hear from Coats until two and a half weeks after the appointment, when she forwarded a photo of her infected eyebrow.

Duh. Now she was NOT.

And listen to the pitiful reasoning this asshole put together.

?There?s no way we could possibly be responsible for the infection at that stage, two and a half weeks after the procedure,? he told the Daily Mail.

Are you serious? WHO then, should be responsible for the outcome of  something YOUR SALON did? 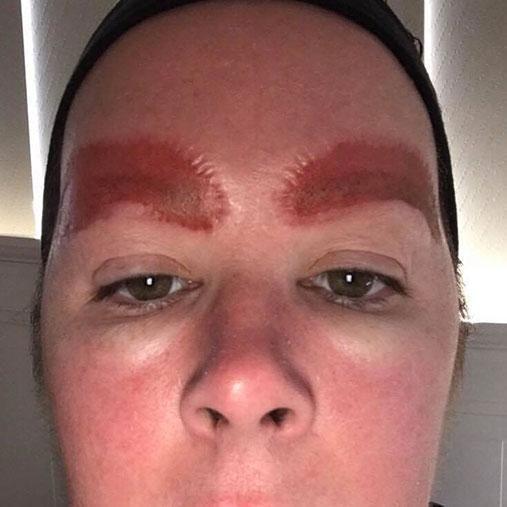 Sounding as if he is boasting, Cleveland said, ?My wife has done over 2,000 of these procedures, and we?ve never had any issues of infection.? He added, ?We?ve been unable to defend ourselves and we are taking action against Ms. Coats for defamation and that?s in the process of being issued.?

My mouth is definitely agape.

Initially, Coats claimed that the 30-minute eyebrow tattoo procedure made her skin painfully red and swollen.

?The next day I woke up, and my skin had come off onto the pillow,? she said. ?I went to the doctor immediately because of the pain and severe swelling.

?It felt like something was eating away at my skin; I was in so much pain,? the poor woman said.

Cleveland issued a statement at the time saying the company abides by ?strict industry best practice, standards, and regulations.

Go here to read how Cleveland further justifies the salons actions and who he believes is really to blame. 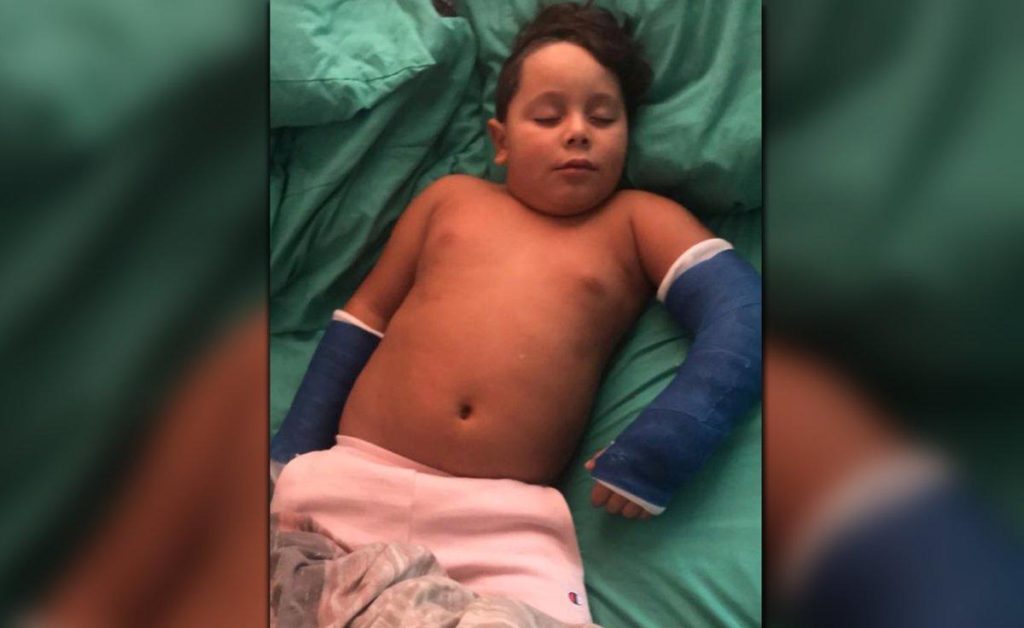 *Imagine being a mother who arrives at your sons school to pick him up and you discover only a short time later that he was forced to sit in school — all day, mind you — with two broken wrists.

…Now imagine no one said a word about his injuries when you arrived.

This is what Krystal Alejandro says happened at P. S. 106 on December 18. She said when she went to her son’s school he complained that his hands were sore and showed her scratches on his arms saying he had fallen on the school playground.

It wasn’t until the little boy, named Armani, kept complaining throughout the night that his mother decided to take him to  Wyckoff Hospital. She was shocked at what the doctors told her!

…that both of her son’s wrists were fractured. END_OF_DOCUMENT_TOKEN_TO_BE_REPLACED 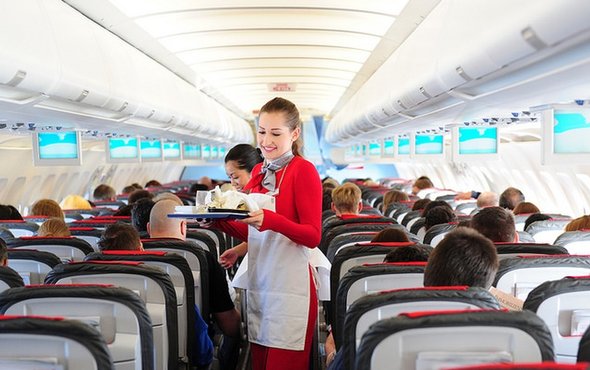 *Remember that horrid story about the Asian doctor who was dragged down the aisle of an airplane? He was bleeding profusely from the head from an injury sustained as he was being manhandled.

Think about it: Is there any chance some of his blood got on the floor? Do you think the entire carpet was cleaned…or just the spots where his blood appeared? You’d be right to doubt it.

Oh the germs that linger.

All of this is to say that the general populous has left all kinds of matter on airplanes — which is why there are some things you should never, ever, do on an airplane

DON’T! Flight attendants reportedly cringe when they see folks walking to the restrooms barefoot. Of course they may not tell you the real reason why. They may say something like, for your safety, in the event a sharp object like a piece of broken glass is lurking. But what they are not saying is, these floors are rarely cleaned well, just spot cleaned. So any kind if germs that may have spread as a result of someone getting sick (read throwing up) or bleeding may still be there.

You should also know about those restrooms…Surface-wise, it looks pretty clean in there, although the smell isn’t always fresh. That’s because in between flights, the bathrooms are only given a quick spray of disinfectant, a wipe down, and then restocked with toilet paper. And sorry to break it to you, but that liquid you see on the floor most likely isn?t water.

Can we say “Eu” again? END_OF_DOCUMENT_TOKEN_TO_BE_REPLACED 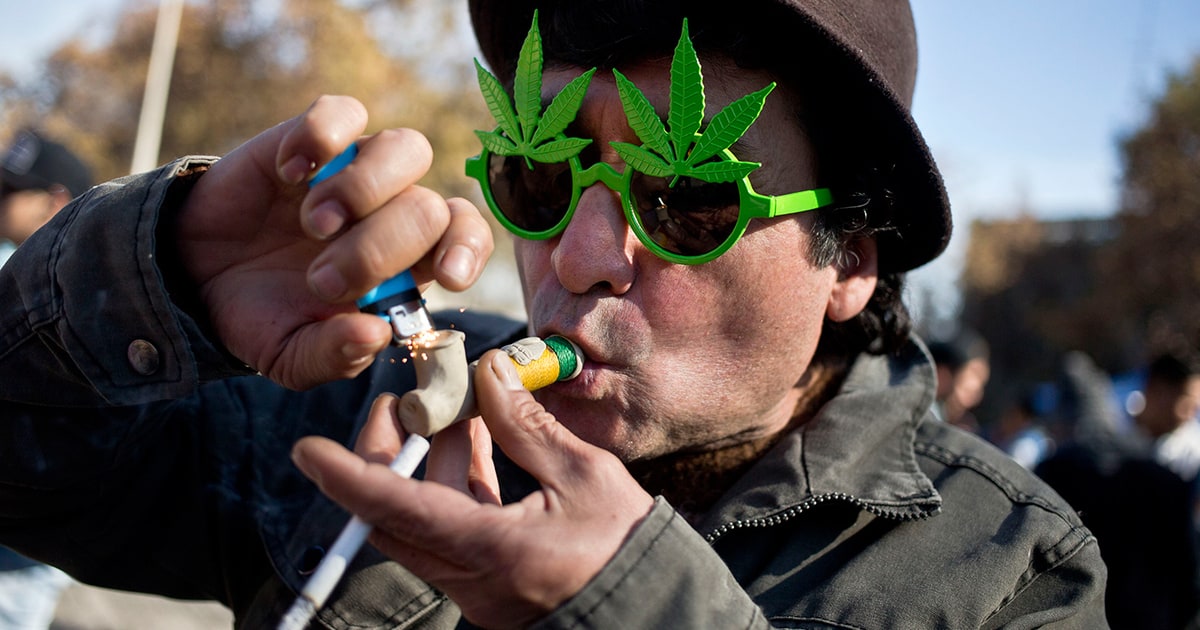 *A lot of folks have been waiting for Prop 64 ( the Adult Use of Marijuana Act) to pass…for a long time, here in California. And on January 1, 2018, it did. Recreational marijuana is now legal. People were lined up for hours before the 6 a.m. opening of an Oakland dispensary, and once inside, cash registers were clicking and clanging like crazy with folks spending hundreds of dollars on weed. One customer even walked out with $1,000 worth in a large grocery bag, according to the New York Times. But real talk, the very last thing gleeful marijuana users should do is lose their damn mind. There are still a lot of gray areas in the crevices of this new law.

‘Old heads’ probably won’t turn too much; after all, they’ve been doing their thing for quite some time now and the new laws won’t make much of a difference to them. But for those we suddenly see riding on the freeway, with clouds of smoke sifting out of the driver’s side window, you might want to slow your roll buddy.

Cops have their eyes peeled for folks just like you. Those in their own world; weaving in and out of traffic without signaling. The unofficial race car drivers. Yes, you’ll soon see just how invincible you’re not. END_OF_DOCUMENT_TOKEN_TO_BE_REPLACED 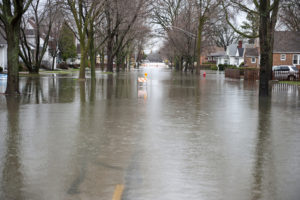 Over two months after Hurricane Maria caused devastation throughout Puerto Rico, some residents are still without power and running water. These issues are just the beginning — potential health crises may arise in the aftermath of this natural disaster.

*An African American nurse in Indiana was fired over the weekend after a series of troubling tweets suggesting white women should sacrifice their sons were discovered under an account later found to be hers.

Social media folks. Misuse it and eventually it WILL catch up to you!

Taiyesha Baker was a recently employed nurse at the Indiana University Health Methodist Hospital prior to being identified as the person behind the screen name: Night Nurse — where one of the controversial tweets  accused white baby boys of being future racists, terrorists, and killers. END_OF_DOCUMENT_TOKEN_TO_BE_REPLACED