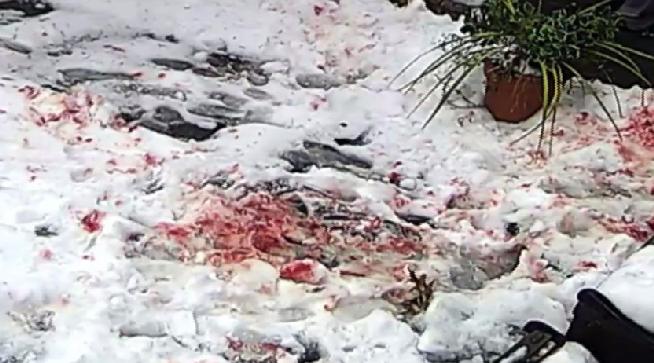 *On top of the pandemic, folks who live in a Queens, NY neighborhood now have another problem: squirrels with bad attitudes.

Residents say one particularly aggressive squirrel has jumped on them and bitten them in the past several weeks.

Micheline Frederick pointed out to WCBS, a bruise on her wrist where she said the squirrel landed on her and then sank its teeth into her fingers and hand.

“We’re wrestling in the snow and there’s blood everywhere and my fingers getting chewed and it won’t let go,” Frederick said. “Eventually, it just stopped and there I was a big bloody mess.”

A photo Frederick says she took after the attack shows a snowy pathway covered in blood.

“This was an MMA cage match! And I lost!” she added.

Two other neighbors told WCBS the squirrel had jumped on them, seemingly unprovoked.

“These squirrels are aggressively going after people,” Vinati Singh said.

The city’s Department of Health advised the neighbors to hire a licensed trapper, but the large metal traps have not yet captured any squirrels, so far.

So, you may be wondering what the problem is. What’s making the squirrels wig out, so to speak? Unfortunately for the residents of the Rego Park neighborhood, the answer is not clear. Fortunately, on the other hand, small rodents like squirrels rarely test positive for rabies and are not known to have transmitted it to humans, according to the Centers for Disease Control and Prevention.