*One of the most iconic phone numbers in rock history, 867-5309 began life scrawled under the name “Jenny” on a bathroom wall in 1982 – the year the band Tommy Tutone took the single to #4 on the Billboard Hot 100.

Nearly four decades later, thanks to the cleverness and ingenuity of rising international hitmaker AV Super Sunshine, the digits – and the immortal hook created from them – have found new life and been repurposed as a classified case file on “X File: 8675309” – the artist’s infectious latest single about a couple’s surreal experience with alien abduction.

After a recent gig where they performed together, Tommy Tutone lead singer Tommy Heath told his friend and ex-manager Stephen Wrench he thought it would be cool if he could find an artist to use his master recording of the hook to create a potential new hit. Wrench, a veteran songwriter, artist and radio promoter who has worked with, among others, Toto, Rick Springfield and Lynyrd Skynyrd, immediately knew the perfect artist to make it happen: AV Super Sunshine. 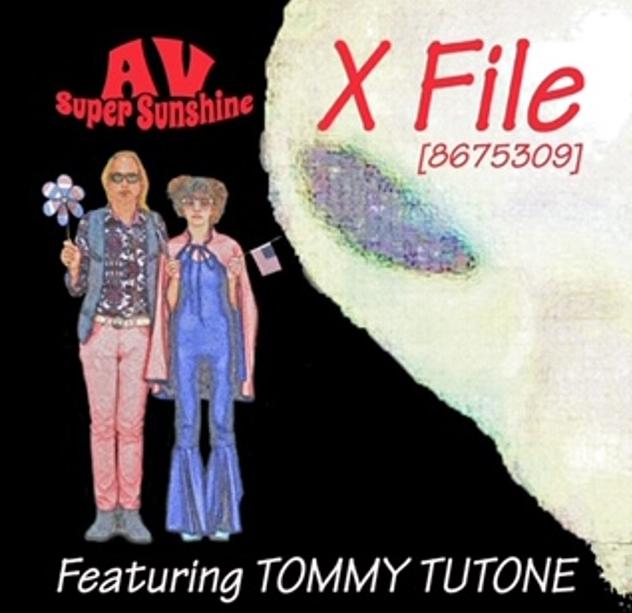 “When Stephen came to me with Tommy’s idea, I was working on a new love song, inspired by the classic TV Show ‘The X-Files,’ about a couple who are abducted by aliens and then become the subject of an FBI coverup,” says AV Super Sunshine. “Tommy’s hook fit perfectly into my song. With the help of my producer Michael Bradford (Deep Purple, Madonna, Kid Rock, Run D.M.C.), we discovered an artistic way to add to the recent UFO and alien conversation while also helping Tommy reach a new generation of fans with his iconic hook.”

AV and Bradford also found a way to incorporate a line from the original song’s bridge (“I got it, I got it”) into the bridge of “X File: 8675309” as words from the alien finding the earth while piloting the craft with the captured couple aboard. Heath says, “I never thought Jenny would reflect an alien abduction. I love the music and the song.”

A true multi-media creative force of nature, AV wrote the track to build excitement for “Alien Abduction,” a film starring him and his wife Philomena that the couple was beginning to shop around just as the pandemic hit. It’s a reality style documentary directed and produced by Jared Sagal. With a running time of 55:28, the film could also be considered a sci-fi drama television feature. The film was scored by Bradford and features clips of “X File: 8675309” and several other AV Super Sunshine songs.

Engaging in vocal dynamics from Johnny Cash low in the verses to two octaves higher in the chorus, AV sets the scene: “We were driving northbound on a cloudy moonless night/Satellite invisible, no stars or headlights/Back at forensics they can’t explain away/What the experts want to write off as an open and shut case.”

The pre- 8675309 hook follows: “It’s who we are, we’re a shooting star/We’re a moving car alien abduction/As we fall in love, we rise above. . .” The bridge takes us aboard the spaceship to share in the couple’s otherworldly experience: “Searching for planet earth we heard the wise one say/”I got it, I got it” as our memories are saved/Moving as fast as light they had us lying face to face/”I got it, I got it!” as we fell from outer space…”

“I think my vocal modulations from low to high are pretty cool, and the way the song adds more depth as it moves towards the bridge brings me happiness,” AV Super Sunshine says. “I have a lot of different ways to structure songs and when I’m telling a good story, I like to include a bridge that tells you a little more. I keep the details simple with us lying face to face, but actually, these crafts are like little pup tents with their own atmosphere and gravity that pulls the crafts around the universe.”

AV continues building buzz and expanding global fan base through radio play, club DJ play, online video, television and cable music programming. With the grass roots support of 250K+ fans across demographic and geographic boundaries, AV Super Sunshine is becoming more than the name of an artist, or a sound, developing into a movement as a true symbol of inclusivity.