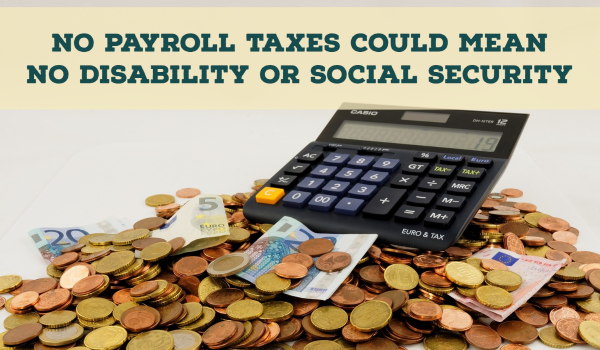 Back in August, President Trump announced a payroll tax holiday to go into effect through the end of the year.

While this could mean people seeing more money in their paychecks now, it could also lead to disastrous results down the road.

Payroll taxes are taken directly from employee checks at 7.65% of their wage which their employer then matches. This money goes on to fund social programs like social security and Medicaid, which provide income and medical care to millions of Americans who tend to be retired senior citizens or have disabilities preventing them from working.

Social security funds are already set to run out sometime in the 2030s but without payroll taxes, which Trump wants to eliminate if re-elected, the fund would run out in 2023. Disability funds would run out even sooner, sometime in 2021. This would leave 29% of the population, or 65 million people, who spent nearly 20 hours a week caring for elderly or disabled loved ones without all the income they need to provide for their loved ones.

That’s not the only reason the payroll tax cuts could cause disaster. Trump only deferred the taxes, which means these taxes would have to be paid back after the holiday ends. This could cause millions of people to owe the government money they can’t pay back because it was spent on mortgage payments and gasoline. Considering only 30% of Americans have established long-term financial plans, it’s likely that many people would end up with a debt that they can’t pay. The taxes could be paid back by doubling the amount taken out of paychecks but that would cause millions of Americans to go home with less money in their paychecks than before the deferment.

This could have a huge impact on the millions of Americans who owe $9.12 trillion in mortgages. Winter tends to be hard on homeowners, as the need to keep homes warm causes increases their electric, gas, and oil payments. Additionally, about 81% of homeowning Gen Xers and Baby Boomers opt to make renovations to their homes, which often happen over winter when they travel to warmer places or to see family. The increases in debt brought on by Christmas and other winter holidays also contribute to a lack of funds in the winter months.

Luckily, many big businesses, like Ford Motors, the US Postal Service, UPS, CVS, and Wells Fargo, are opting to simply ignore the deferment altogether because it is more hassle to figure how to end and then reimplement the tax than it is to just keep paying it. It’s highly unlikely any business will want to mess with their billing so drastically to implement this cut.

Even if many businesses don’t choose to implement the cut, just the possibility of it puts many Americans in a precarious position. Employees across all industries will need to communicate with their employers and carefully plan for their financial futures to prepare for the potential of payroll tax cuts.