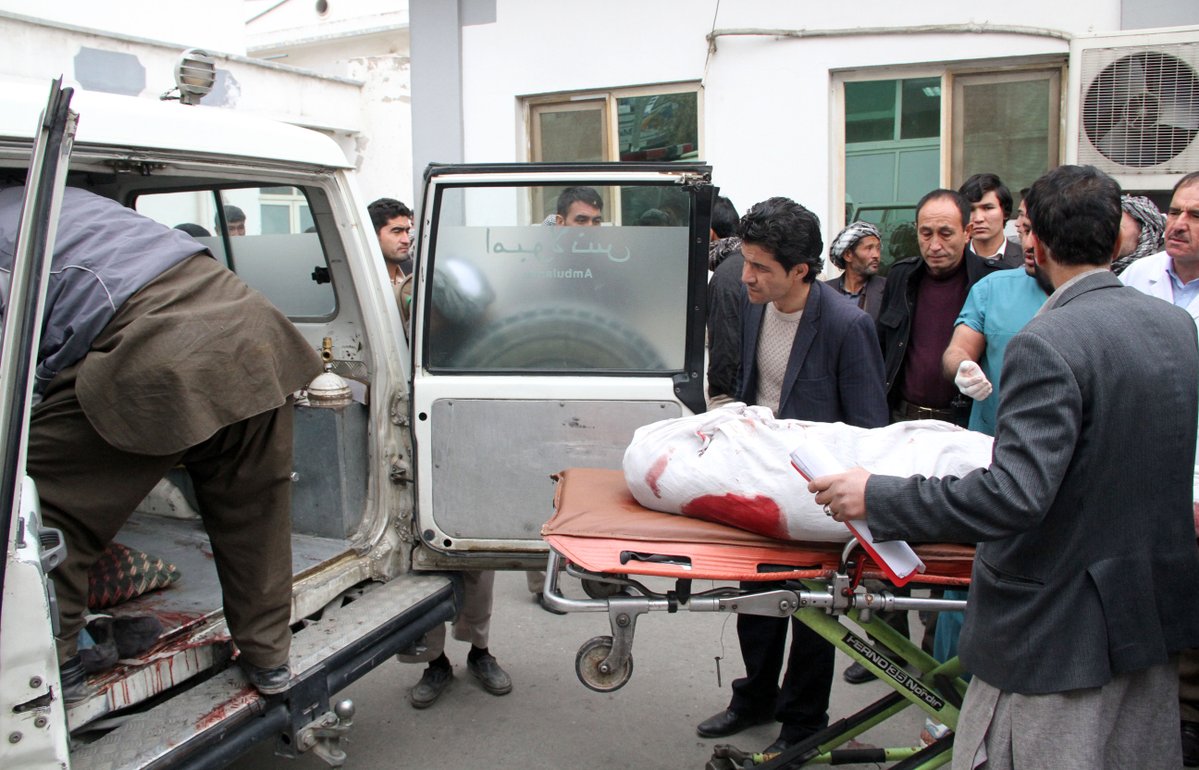 Mourners at a funeral and babies at a maternity ward were among the 133 killed and injured Tuesday in militant attacks in Afghanistan.

Officials said militants attacked a 100-bed maternity hospital in the Dasht Barchi area of western Kabul, killing 16 people, including women and children, and injuring 20 others injured. Humanitarian organization Doctors without Borders operates a maternity clinic there.

The assault ended Tuesday afternoon with the killing of all three attackers, said Tariq Arian, spokesman for the Ministry of Interior.

“Hospitals are centers of compassion with dedicated Afghan and MSF Afghanistan staff caring for innocent civilians,” he said, referring to Medecin sans Fronteras, the French name for Doctors without Borders.

“Any assault on innocents was unforgivable, but to attack infants and women in labor in a hospital was an act of sheer evil,” said the secretary in a statement from the State Department.

In a separate attack in Nangarhar province, a suicide bomber attacked the funeral of a local police commander in the eastern province of Nangarhar, leaving at least 26 people dead and more than 68 wounded during what was the deadliest day of the year so far.

“Terrorists who attack mourners lining up for prayer at a funeral are only seeking to tear apart the bonds that hold families and communities together, but they will never succeed,” said Pompeo.

“I condemn the attack today in Nangarhar. Our deepest sympathy to the victims, friends, and families of those lost,” said Wilson. “Terrorists use violence to spread fear among the innocent. Those who attack a solemn ceremony like a funeral have no virtue or morality.”

“NATO is committed to Afghanistan in fight against terrorism and strongly condemned the attacks,” said the NATO office in a written statement.

The United Kingdom, France, Germany, Pakistan and other members of the international community also condemned the attacks in separate statements.

President Ashraf Ghani condemned the attacks, in which innocent civilians, including women and children had been killed.

In response, he directed security forces to come out of a defensive position and adopt an offensive posture.

“For the protection of our country, its people, public places, state infrastructure and dismantling future Taliban and Daesh attacks, I command security forces to come out of defensive position and adopt offensive posture,” said Ghani during an address to the nation on National Radio Television.

“May Allah protect you from coronavirus and terrorist attacks,” he said.

The Taliban, on the behest of foreigners, continue attacks and bloodshed in the country, he said.

Ghani renewed his call for a ceasefire and peace with the Taliban, and at the same time said the government’s call for peace should not be considered its weakness.

During the holy month of Ramadan and amidst the threat of COVID-19, the dual attacks were particularly appalling, Pompeo said, noting Taliban’s denial of involvement.

“The Taliban and the Afghan government should cooperate to bring the perpetrators to justice. As long as there is no sustained reduction in violence and sufficient progress towards a negotiated political settlement, Afghanistan will remain vulnerable to terrorism,” said Pompeo.

Violence continues to escalate after the U.S.-Taliban peace agreement was signed in late February. Afghans deserve a future free from terror, said Pompeo, and the ongoing peace process continues to present a critical opportunity for them to come together to build a united front against the menace of terrorism.

The Taliban rejected their involvement in the Kabul attack. No other group has claimed credit.

The post More than 100 killed and injured in Afghanistan’s deadliest day of 2020 appeared first on Zenger News.