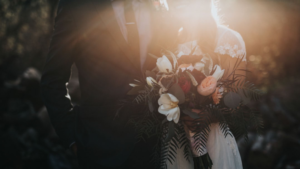 There’s this Yiddish proverb that says, “Man plans and God laughs.” The saying points to the volatility of life and how, despite intricate planning, things don’t always pan out as planned. But it there’s one thing Americans seem to be great at planning for, it’s weddings. In the United States, there are 44,230 weddings on average that take place each weekend. In the year 2018, the U.S. wedding industry was worth a mind-boggling $72 billion. It’s safe to say that weddings are big business.

However, the human race is currently facing what is arguably one of the biggest challenges to the wedding industry — and bigger still, its healthcare systems. COVID-19, the mysterious viral disease that supposedly started in China’s Wuhan province, is now a pandemic. And while the U.S. reported ten people dying daily as a result of unintentional drowning in 2014, there are already hundreds nationwide who have died from the novel coronavirus..

Nations all over the world have geared up in readiness for the illness, with lots of state resources now being diverted to handle the health crisis. In the U.S., more than 6,200 hospitals are currently operating and are gearing up to battle the disease, with several hospitals moving carts of supplies in storage to make room for potential patients.

The impact of the illness has been felt across all sectors of world economies, causing massive layoffs and disruptions in business activities. Weddings have also been hard hit by the pandemic, with a large number of couples postponing or canceling their nuptials altogether.

All this comes even as couples have already spent tens of thousands of dollars on their big day. The cancellations are in major part due to the guidelines given by national federations, with the Center for Disease Control (CDC) recommending against gatherings of more than 50 people.

Some couples have decided that the show must go on. That meant coming up with non-conventional, albeit creative, ways to tie the knot. For instance, one couple for in L.A. had to budget for hand sanitizers for each table. The couple also had to spread out the guests’ tables and chairs further apart. Guests had to settle for tapping elbows over usual hugs and handshakes.

Another couple in Philadelphia opted to host a private ceremony in their living room. Rather than waste the day binging on the latest Netflix crazes, the bride sent an e-vite to her soon-to-be hubby. At 10 a.m., he showed up in the living room all dressed up; afterward, they exchanged gifts, had brunch, and toasted to their love. Their “honeymoon” was a weekend quarantine together in the safety of their home.

Wedding vendors have also suffered mass cancellations following the announcement of the severity of the outbreak in the U.S. Wedding planners have had a hard time rescheduling events, with DJs and photographers dealing with last-minute cancellations and an uncertain financial future. Catering companies, on order from the health department, cannot deliver as scheduled. The domino effect from these postponements means that wedding vendors all over are staring at massive losses and tough times for the months ahead.

Professional wedding planners who have longstanding relationships with their suppliers have to negotiate the minimum guest counts. This step is geared towards cushioning their clients, as family and friends decline invites. Travel agents are also feeling the pinch of wedding cancellations, with some trying to salvage the situation by rerouting their customers away from European and Asian destinations.

Ordinances have swooped in to put in place restrictions on large gatherings, as well. In Lakewood, for instance, police had to come in and break up two weddings. National and state governments both emphasize the need to keep public groups on the lower end. COVID-19 is notorious for its ease of human-to-human transmission, which is why the law is so keen on avoiding large gatherings. States are also encouraging high levels of hygiene, with people being urged to stay at home if they feel unwell.

Some couples have opted for a more bullish approach towards the pandemic by deciding to go ahead with their ceremonies. In Mexico City, it appeared that it was business as usual among the locals, with many not appreciating the gravity of the situation. The bride and groom kissed and hugged several guests who’d attended the function. The lovely couple also posed for pictures with friends and families who then proceeded to participate in the reception, ignoring all the pre-set guidelines issued by the government.

In the wake of the disease, lots of guests are taking the necessary precautions to try and curb the spread. In a majority of cases, guests have called the bride and groom canceling their scheduled attendance. People understand that the best way to try and mitigate the spread of the illness is to maintain the recommended social distancing.

The truth is, weddings take a long time to plan. The average prep time for any wedding is at least ten months, going all the way up to two years. If you were in the middle of planning your wedding amid the outbreak, that would inevitably throw a spanner in the works. In such a situation, you have three options.

The first option is to go ahead with the ceremony as planned. This step would, however, call for drastic measures and if your guest list is over 50, you’d have to trim it and set up your guests in a way that they’d be far apart during the ceremony. The second option is having a small, intimate ceremony now and planning a bigger ceremony later in the year or once the spread of the illness has significantly reduced. The third and most drastic measure would be to postpone everything until such a time when you can proceed with your wedding plans.

If you had a wedding insurance cover before the outbreak, you might qualify for claims but go over the details of the claim to see if you’re covered. If you had plans for a 2021 wedding, you should still go ahead and plan for your big day. However, in light of the current situation, it would be best to have contingency plans in any contracts you sign with your vendors.

It’s clear that COVID-19 isn’t going anywhere soon — especially with many people resistant to the idea of social distancing. Even more frustrating, some still think the reaction to the pandemic is overblown. But if you were hoping to go ahead with your original wedding plans in a month or two, you’re going to have to roll with the punches and accept that your special day may look a bit different than how you conceptualized it in your head.