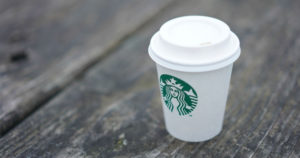 Starbucks has a new cup, but you may not even notice.

The coffee chain is testing a new prototype cup that is both recyclable and compostable. Like their traditional cups, this new one is made from paper. The key difference is the plastic interior liner has been replaced with a compostable liner. This change allows their cups to be composted in industrial composters.

The cups will be tested first at locations in Seattle, London, New York, San Francisco, and Vancouver.

Because the changes to the cup are interior, you shouldn’t notice any difference with your next cup of coffee. The company even said in a recent statement, “Customers will not see any noticeable difference from the current cup”.

Starbucks has been making efforts for the past few years to become a more environmentally-friendly business. In 2015, they met their goal to purchase enough renewable energy to power their locations in the U.S. and Canada.

Starbucks has previously made goals to serve more drinks in reusable containers but was not able to meet them. Until recently, they encouraged people to bring their reusable cups for a small discount but have discontinued that policy with recent health concerns over the coronavirus.

A few years ago Starbucks, along with their food business rival McDonald’s, committed $10 million toward a contest called the NextGen Cup Challenge.

The challenge encouraged people to come up with a solution for a more eco-friendly cup. They selected several winners, one of which is the prototype that they are now testing. A typical U.S. business will increase its paper output by 25% per year, but with Starbuck’s greener choices and the ongoing NextGen Cup Challenge, they should be able to combat the negative environmental effects of their output.

Earlier this year they announced that they plan to reduce their greenhouse emissions and the amount of waste sent to landfills over the next decade. They also have goals to conserve and replenish 50% of all the water they use by 2030. This goal is especially impactful as only 3% of the water on Earth is freshwater.

Looking To The Future

While the compostable liners are a huge step in the right direction towards a more eco-friendly business, there is still a concern with the new cups. The liners need to be separated from the cup during the recycling process. Starbucks is testing the new cup in cities that have recycling facilities that can separate the two parts. At this point, with the cup being entirely recyclable, it’s a matter of whether facilities will separate the two parts or not that still leaves room for concern. Starbucks has done their part, it’s up to recycling facilities and the likes to see if a difference can be made.

With all of the great changes coming in the future for Starbucks and their business, now may be a great time to look into investing in their business. Only 30% of Americans have an established long-term financial plan, and investing in a smart business could be the first step.

Individuals who frequent Starbucks should also do their part by ensuring that they are properly recycling and disposing of cups and other items they purchase from the business. Another way to make a difference is to work for and purchase from a company that supports eco-friendly initiatives. In 2018, there were over 162 million U.S. people comprising the civilian labor force. Imagine what a difference could be made with the support of that number of people.