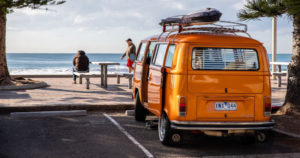 A growing number of Americans are choosing to travel within the U.S. rather than abroad. According to new data from Allianz Global Assistance’s annual Top 10 Spring Break Destinations survey, which analyzed over 2.7 million flight itineraries, stateside spring break trips have increased by 24% in just the past year. That’s 6% higher than the number of Americans traveling internationally.

In 2016, approximately 9.6 million overseas trips were made by non-residents to Ireland. But as of 2019, nearly 50% of working Americans can’t afford to take a vacation, let alone travel abroad.

According to a 2019 survey of 2,504 U.S. adults by YouGov commissioned by Bankrate, up to 68% of respondents said they skipped a recreational activity in the past year due to concerns about money. The most common recreational activity skipped due to economic limitations was a vacation. At least 28% of survey respondents said their ability to afford to travel was lower than it was for them five years ago.

“There’s so much pressure on people right now that it’s easy for fun to feel wrong,” said Aimee Daramus, Psy.D, of Behavioral Health Associates in Chicago. “Maybe it feels wrong to go out or take a vacation when you could put that money towards student loans or a retirement fund.”

“Fun might be something that’s always ‘next weekend’ because there are things to do now,” added Daramus, “but you never quite arrive at that mythological time when your to-do list is empty.”

But it isn’t only vacations that Americans are skipping out on. In the YouGov survey, up to 32% of respondents said they sacrificed going to a local art event or concert because of money concerns. Another 26% said they skipped going to the zoo, aquarium, and amusement park. And another 25% said they gave up going to the movies.

“The problem is that our energy isn’t bottomless, and we need to rest and recharge,” said Daramus. “If your life has no fun and you guilt yourself for every dollar you spend on yourself, you’re well on your way to burnout, depression, or maybe some other mental health problem, but you may not even realize it because feeling that bad becomes your new normal.”

Americans may not be vacationing like usual, but they’re still managing to travel domestically and find entertainment right at home. According to the Allianz survey, the most popular domestic destinations for 2020 include Orlando, Phoenix, Las Vegas, Los Angeles, New York, Fort Lauderdale, Fort Myers, Miami, Salt Lake City, and Tampa.