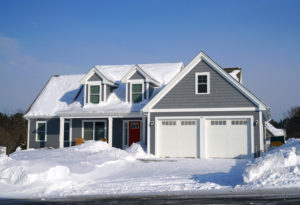 Winter Storm Gage slammed the Midwest and Northern New England on Monday, December 30, downing power lines and trees across the states. Tens of thousands of people lost electricity and the town of Otis, MA declared a state of emergency.

“We’re advising residents not to travel [or] go outdoors unless it’s an emergency due to the imminent danger of falling trees,” said Otis Police Chief Daniel Hamill to Western Mass News. “[There are] widespread hazardous road conditions as well as extreme risk to lives and property.”

Winter Storm Gage brought steady winds in Ohio that topped at 30 mph and gusts that reached up to 70 mph. Minnesota and Michigan also saw gusts at 60 mph.

Up to 44,500 people in Michigan are facing power outages as of Monday afternoon. Another 100,000 people in Ohio and 300 people in Otis are also facing a blackout.

High winds knocked down power lines and significantly damaged trees, which are currently a threat in the aftermath of the storm.

“Trees are falling at such a random rate, you just don’t know where they’re going to fall next,” said Hamill. “I want to let our residents know this storm is not to be taken lightly, this is a serious storm and residents need to be careful, vigilant of these falling trees and the ice buildup.”

In average weather conditions, up to 77% of vehicles on U.S. roads need some form of maintenance and repairs. But snow and ice can quickly turn the country’s 2.2 million miles of paved roads slick and dangerous.

In Minnesota alone, there were 470 reported crashes and 43 injuries. North Dakota also issued a no-travel advisory in the wake of the storm, a rarity for the state.

“This is one the worst storms we’ve had, just because we had ice on the bottom of it and we received several more inches than we expected,” said Fargo Mayor Tim Mahoney in an interview with The Weather Channel.

“We’re telling people to be patient,” Mahoney said. “Help your neighbor if you can. If you can make it a little easier for them to get around, please do that.”