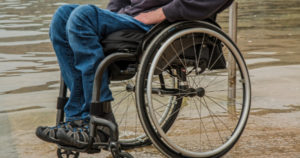 While many people go through their daily routine without thinking about cracks in the sidewalk, a set of stairs, or conversing with a cashier, there’s a significant percentage of the global population that struggles in some way with these activities that are taken for granted. Those living with disabilities in today’s modern world still face an enormous amount of difficulty in regular, routine activities, and the current widespread lack of accessibility could be holding back progress.

While many newer public buildings and accommodations are built with at least some degree of disability inclusion in mind, existing buildings often lack basic accessibility. Even sidewalks and doorways can create extreme difficulty for wheelchair-users, of whom there are many. There are 2 million new wheelchair users in the United States every year. While technology and mobile apps are being developed to help warn chair-users of difficult-to-navigate spaces, these are often not enough to make daily life disability-inclusive.

Physical limitations, of course, extend beyond those who use wheelchairs on a regular basis. Many face additional complications as a result of less-visible physical limitations, including chronic pain, motor control issues, or even something as simple as back pain. Back pain is one of the most common reasons for missed work. In fact, back pain is the second most common reason for visits to the doctor’s office, outnumbered only by upper-respiratory infections. Physical limitations, particularly those that include mobility issues or fine motor skills, can keep people from doing things that many take for granted, such as traveling or going out to eat.

As more, newer buildings are being designed with physical limitations in mind, there’s yet another category of disability that often goes unaddressed. Those with mental health issues or sensory struggles, including hearing or vision impairment, are often still without assistance in otherwise “accessible” spaces. Many daily environments can be overstimulating for those with certain mental health conditions; loud or visually busy spaces like grocery stores or crowded streets can be incredibly challenging for those with autism or other sensory-processing issues. Likewise, while a ramp may allow a wheelchair-user to enter a classroom, for example, many hearing impaired students struggle in upper-levels of academia due to a lack of transcription options. This is a problem that will likely become more prominent in the coming years; it is estimated that by 2025, 900 million people throughout the world will be hearing impaired.

While most non-disabled people rarely have to consider the impacts of inaccessible spaces, those who do struggle often suffer in silence. This is particularly true for those who rely on assistance for daily living, including the elderly. Because these individuals struggle to advocate for themselves, they can be forced to deal with inaccessible conditions and worse. Caretakers, unfortunately, will sometimes abuse or neglect those with disabilities in their care; a recent study estimated that only one in 14 cases of elder abuse are ever reported to authorities.

However, this does not mean that the future is inevitably going to remain inaccessible. Thanks to the age of the internet and increasing resource availability online, more members of the disability community are able to now share their experiences in public ways. Social media has led to more vocal and successful efforts at increasing accessibility, particularly in the United States. If these efforts and awareness continue, it’s possible that the future will be increasingly accessible for everyone, allowing more people a chance to succeed, thrive, and live healthy lives independently.