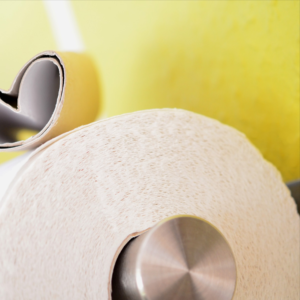 The U.S. uses about 92 million metric tons of paper annually for a variety of means. We use it to create works of art. We use it to make cards for birthdays, weddings, and “get well” message. We use it for marketing, sending about 100 million pieces of junk mail to homes every year.

One individual in Marlborough, Massachusetts used toilet paper to create an origami rose in a home that they’d broken into.

KTVU reports that Nate Roman had his home broken into on May 15 while he was at work.

“It’s possible that I forgot to lock the back door, they didn’t break anything while entering. I usually forget to arm my alarm during the day, but unfortunately (sic) that also happened, so I don’t have any video, despite having cameras,” Roman wrote in a post on Facebook.

“Ready for the weird part? Not only did they not take anything (that I can find), but the purpose of the visit was to clean my bathrooms and bedrooms. They made the beds, vacuumed the rugs, scrubbed the toilets and left tp roses.”

That’s right — the would-be-burglar actually put the house back together rather than tear it apart, as most burglars do. Considering that even carpet that looks clean can hold up to a pound of dirt, this burglar certainly saved a full day of house cleaning for the homeowner.

If not for his impeccable interior design skills, you might have guessed the burglar would be one of the average 8.4 million people in the construction industry.

The FBI reports that, in 2017, there were more than 1.4 million burglaries, a 7.6% decrease in comparison to 2016’s data set. Burglaries accounted for 18.2% of the approximate number of property crimes and victims suffered about $2.4 billion in property losses. The average loss per burglary was $2,416.

In Roman’s case, he gained a tidy home at the cost of his peace of mind. In fact, he may have even saved money with closed doors and windows, which if left open can eat up to 30% of home heating costs.

His leading theory is that a housekeeping service accidentally went to the wrong home and cleaned his place.

“It’s still weird and creepy AF,” Roman’s Facebook post continues. “No idea what to think about this.”