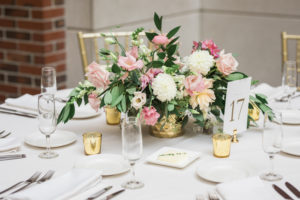 When the wedding registry concept was first launched in the 1920s, many new couples were much younger and were just moving out from their parents’ homes. But today’s brides and grooms are, on average, in their late 20s and early 30s.

Most couples have lived together for years and already own the kitchen appliances and silverware that are often on the traditional registry. Because of this, many couples are asking guests to help pay for honeymoons, down payments for houses, or investments in businesses. With first time home buyers purchasing 2.07 million homes in 2017, a 7% increase since 2016, getting that influx of cash has been helping young couples buy their first home together.

This shift may sound strange, but considering 8% of a typical wedding budget is spent only on flowers and the average down payment on a house is $20,000, it’s understandable. However, this doesn’t mean traditional registries have gone completely out the window.

“Registries as a whole are not dying,” said Alyssa Longobucco, the style, and planning editor for The Knot. “Still, nine in 10 couples establish a wedding registry. That’s 88% of couples, which is still a large majority. It’s just a matter of those registries looking different.”

Many millennials aren’t just asking for money, but are registering for it. “Cash funds are a huge, huge way of asking for wedding presents,” said Longobucco. “And they’re up 6% in the last year alone.”

Arden Larberg, 30, and her fiance Matt Phillips, 31, said they registered for a few household items for their wedding, but were largely in favor of donations toward their Hawaii honeymoon. However, wedding guests weren’t quite as on-board.

“Our older friends and family had this knee-jerk reaction where they were like, ‘That’s tacky,'” said Larberg. “Which is so weird. I’m like, ‘We’re in our 30s. We don’t need stuff, y’all.'”

According to NerdWallet, up to 52% of wedding guests in 2018 agreed that asking guests to give money instead of a gift is tacky and that number only goes up with age. However, Lizzie Post, co-president of the Emily Post Institute, says it’s not tacky at all.

“It’s perfectly appropriate to give cash, checks, or gift cards,” said Post. “And that’s been appropriate for quite some time.”

In fact, many cultures have been giving money as a ceremonial gift for years. With millennials representing the nation’s most diverse generation, it makes sense to have this shift toward money as a viable gift option.

“We suggest you not just do random or cash-only funds,” said Post, citing that some guests may feel like cash is a financial transaction rather than a gift. “You want to have something it’s going towards, and that helps to giver feel like they’re giving something specific, and I think that makes it feel connected.”

“This shift has been happening for a while now, and I think we’re reaching a critical turning point in the shift,” said Sara Margulis, CEO and co-founder of Honeyfund. Honeyfund is a free honeymoon registry and a major player in the cash-fund space.

“More and more couples are living together before marriage,” said Margulis. In fact, millennials’ cohabitation before marriage is just one of the reasons why divorce rates have gone down.

Not only is this better for millennials, but it’s also better for their children who would otherwise spend 277 days out of the year with one parent.

“They have their household set up,” said Margulis, “and they don’t have those savings that prior generations have, and they also value experiences over things. Things happen gradually until there’s a tipping point, and I think we’re at the tipping point. [With] the millennials as the wedding generation now, it’s just a no-brainer.”