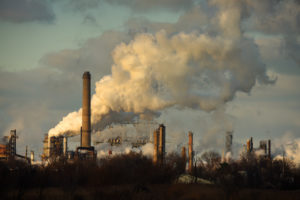 There are biological, chemical, and physical hazards that can contaminate food and the environment. Researchers at the University of Minnesota identified which products/services have a byproduct of air pollution such as factories and transportation.

After combining these data sets, researchers found a major disparity between the groups of people who consumed products contributing directly to air pollution and those who lived in areas with the highest amount of pollution.

“While the consumption of energy and products is driven by the consumer, that pollution is coming from the system that produces our electricity and produces our food and gets our goods around the country,” said David Reichmuth.

Reichmuth was not involved in the study but is a senior engineer with the clean vehicles program at the Union of Concerned Scientists.

“The pollution is coming from the systems we use, not the consumers. It’s coming from electricity generation, coal, fossil fuels, and even fertilizer and animal waste,” said Reichmuth.

However, consumers also control the demand for the systems that generate air pollution. So to determine who’s driving that demand, researchers separated “end-use” categories into seven groups. These groups include electricity, food, goods, information and entertainment, services, shelter, and transportation.

Between 2003 and 2015, white Americans consumed more goods and services that produced higher amounts of air pollution.

This is a problem for many reasons. Air pollution increases the risk of chronic health conditions including breast cancer, which is already two-times higher for women with one affected first-degree female relative. With occupational lung diseases being the number one occupation associated illness in the United States, these populations are being negatively affected by the close proximity to this quality of air.

Air pollution also has a major impact on early brain development. The brain makes most connections among its cells before a child turns 10, and research shows that air pollution is linked to weaker verbal and nonverbal IQ and memory.

Geopolitics and class history are the main causes of the pollution disparity, the study reports. Because of racial and economic inequality, people of color are often forced to live in urban areas that are closer to freeways and factories, which increases pollution exposure.

“Our analysis shows for the first time how pollution inequity is driven by differences among racial-ethnic groups in both exposure and the consumption that leads to emissions. Still, questions remain about the spatial context of pollution inequity, its underlying causes, how best to address it, and its generalizability,” researchers said.

Fortunately, the study found that levels of pollution have also decreased between 2003 and 2015 in all areas.