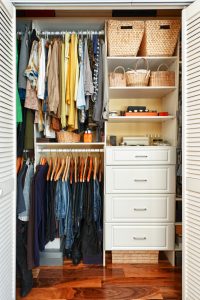 Life often imitates art, but one student attending the University of North Carolina at Greensboro didn’t expect her life to turn into a horror movie. Just as movie attendees have been shocked for decades, Maddie was stunned to find a 30-year-old man inside the closet of her off-campus apartment.

Maddie, who declined her offer her last name, discovered the intruder on the evening of February 3. Before confronting the strange noises she had heard in her closet, she had joked among her roommates that her missing clothing and the strange handprints on the walls were the work of a mischievous spirit.

But after hearing an aggressive rattling from her closet, Maddie readied for a confrontation. What she found shocked her.

If this were a movie, the audience would be prepping for a jump scare.

“I just hear rattling in my closet. It sounded like a raccoon in my closet,” Maddie told Fox 8. “I?m like who’s there? And somebody answers me. He’s like ‘oh, my name is Drew.’ I open the door and he’s in there, wearing all of my clothes. My socks. My shoes. And he has a book bag full of my clothes.”

Maddie held the door closed and tried to make an emergency call on her mobile phone until the intruder, Andrew Swofford, promised that he would not harm her. She then contacted her boyfriend and made conversation with the man to distract him until help could arrive.

But Maddie’s interactions with Andrew only got stranger.

“He tries on my hat. He goes in the bathroom and looks in the mirror and then is like ‘you’re really pretty, can I give you a hug?'” she said. “But he never touched me.”

Police said that the invader was on drugs at the time on the most recent invasion. Swofford left peacefully and was picked up from a nearby gas station before being taken into police custody.

One of the most puzzling aspects of the case is that there were no obvious signs of forced entry. Police think the perpetrator may have entered through the window or perhaps tampered with the lock on the door.

On top of that, no reports have claimed why the man was in Maddie’s apartment to begin with. While 50% of consumers will enter a business because of a sign, there were no signifying features on Maddie’s home that would prompt such a strange occurrence to take place.

The intruder is being charged with 14 felonies and has been jailed on a $26,000 bond.

Since the incident, Maddie has put down a deposit on a new apartment. She claims that she doesn’t feel safe knowing that someone had been staying in her apartment without her knowledge. This isn’t surprising since more than 40% of consumers would stop doing business with a company that suffered a security breach. The decision to relocate the students was approved by property management company and further maintenance on the apartments has begun to assure an incident like this from happening in the future.