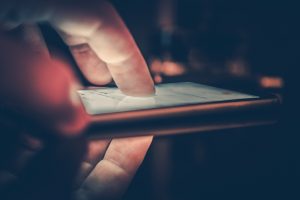 Patton Oswalt is a famous, loud-mouthed comedian. Naturally, he has a substantial Twitter following of millions and uses the platform to spout comedic commentary on whatever strikes his fancy. He responded in comedic kind to a Donald Trump post about building a border wall. Because of Oswalt’s vast following, he gets responses from trolls pretty often and shoots banter right back at them. One man in particular — Michael Beatty — was throwing shade back at Oswalt saying he was glad (spoiler alert) his character died in Blade Trinity and that he shoots a basketball like the “sawed off little man he is” (Oswalt is a short fella).

Good comedians are good because they do research before dropping jokes. There’s background and context to go along with off-the-cuff comedy. So, Oswalt visited Beatty’s Twitter profile to do exactly that and what he found changed the whole tone of the conversation.

He found that Beatty was suffering from a myriad of medical complications which he couldn’t afford. From sepsis to an eight-day coma from complications of being diabetic, Beatty was trying to raise money to pay for medical bills that he couldn’t afford. Longer lives are expected from people who spend a mere seven hours a week doing physical activity, but Beatty, a U.S. military veteran, couldn’t arise from hospital beds and had no financial support through insurance.

“Aw, man. This dude just attacked me on Twitter and I joked back but then I looked at his timeline and he?s in a LOT of trouble health-wise. I?d be pissed off too. He?s been dealt some shitty cards ? let?s deal him some good ones. Click and donate ? just like I?m about to,” Oswalt’s tweet read.

Aw, man. This dude just attacked me on Twitter and I joked back but then I looked at his timeline and he?s in a LOT of trouble health-wise. I?d be pissed off too. He?s been dealt some shitty cards ? let?s deal him some good ones. Click and donate ? just like I?m about to. https://t.co/6zRdZ430WG

To help Beatty with medical expenses, Oswalt donated $2,000 on the spot to kick off the fundraiser. Then others followed. The original goal of the GoFundMe was $5,000 and it has now surpassed $32,000.

Studies have shown that 35% of people wouldn’t have discovered a business if it wasn’t for signage. An even smaller percentage of people would’ve discovered the ailments of Beatty without Oswalt’s help. The interaction naturally went viral, hence the donations. The conversation surrounding it brought questions about the state of healthcare in the United States and, regardless of political persuasion, much of the conversations were amicable. Which is tough to find on Twitter.

Beatty responded, humbled by the whole ordeal and admitting that he had learned a great deal about the harm his own words could carry. Oswalt was not the first person he had said mean things to on Twitter’s platform. Beatty even confessed that the outpouring of support had brought him — a “man who never cries” — to tears.

Oswalt, true to his form, couldn’t pass up the opportunity to make a joke when hearing this:

“See, THIS is why compassion and forgiveness are the best — wait, you CRIED?!? You [expletive] [expletive]! Donation CANCELLED.”

The donation was not canceled. And just like that, a Twitter interaction that could’ve gone to hell turned into a heartwarming story of human beings setting aside differences and raising each other up. With a little sass to boot.