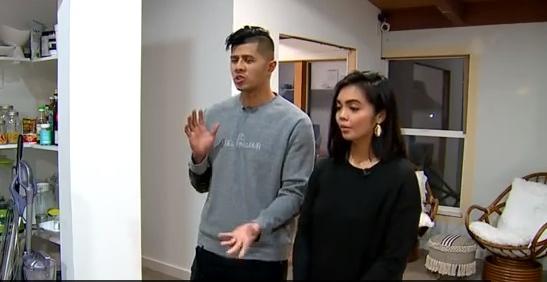 ?I remember telling my boyfriend, ?I feel like someone is stalking me,’? she said. She was so uneasy that she resorted to having Casallo meet her at her car and walk her to their front door whenever she came home late at night. It was during those weeks that she began to hear ?faint voices and faint music,? but she couldn?t pinpoint the source.

She said she heard the noises in the mornings after her boyfriend Conrado would leave to drop the kids off at school, and she was home alone having coffee.

?I thought it was Alexa, or some laptop or computer was on,? she said. ?I would listen intently. At one point I thought it was coming from my daughter?s baby monitor, but the iPad wasn?t on.? She even worried that someone might be inside the house ? but she would only hear the sounds when she was in the living room.

Laguidao didn’t want to tell Casallo she had been hearing things, but one early morning at about 4am, he finally heard them too.

?We both woke up because we heard loud broadcasting noises, and they were coming from the camera,? she said. ?People were talking through it. ?Shoot! Get down! Freeze!? It freaked both of us out.? She said Casallo immediately unplugged the living room camera, but realized he could still hear sounds coming from the one outside, and unplugged that one too.

However, the next morning Laguidao decided the plug the cameras back in.

?I was like, ?Maybe it?s a signal interruption,’? she said. ?I decided to just let it go.? Then, the following Monday afternoon, the situation got worse.

Laguidao said she was home alone with the twins on Monday and was working on her laptop while they watched a movie. Her baby daughter was at her grandmother?s house and Casallo was at work. She said voices started talking to the twins through the camera ? and the children talked back, thinking it was their dad, who checks in through the Nest home security system from time to time.

And then things got even more weird and scary. Laguidao said she was home alone with the twins (the baby was with her grandmother) and was working on her laptop while they watched a movie.

She said voices started talking to the twins through the camera ? and the children talked back, thinking it was their dad, who checks in through the Nest home security system from time to time.

?They starting rapping and saying the N-word,? Laguidao recalls of the voices. ?They were telling us to ?Shut the F up, you N-word!? She said the situation became even more disturbing when the voices made it clear to her that they could see her. ?They were saying, ?nice a**.? Then they said, ?nice laptop.’? Miraculously, Laguidao was able to keep her composure. ?I thought, ?These people are looking at me right now, so don?t do anything crazy,’? she said. ?It was just me and the kids in the house. We were really vulnerable.?

Find out what else happened. Get the full story at Yahoo.