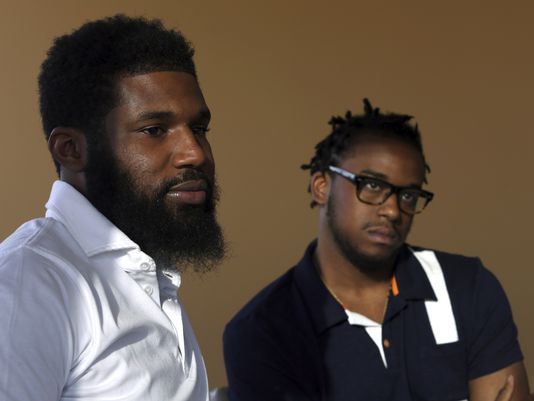 These two men have since been sought out by all kinds of news agencies, including the Associated Press, wondering what their next steps would be. Where were they going to go from here? Tongues were wagging about the monumental lawsuit they’d probably file, and how this incident of what has become known as “retail profiling” and “shopping while Black,” will contribute to the already heated racial climate of the country.

But here is where these two men changed a negative into a positive. They made a choice not to rest in “victim” mode, but instead, use the platform built on the stairs of racial profiling and change its course of direction to befit a victorious outcome.

Rashon Nelson and Donte Robinson settled with the city on Wednesday for a symbolic $1 each. But in addition, a promise from officials to set up a $200,000 program for young entrepreneurs, targeted for Philly’s public high school students, is a part of the deal.

They also settled with Starbucks for an undisclosed amount, but in addition, through a partnership with Arizona State University, Starbucks agreed to pay for the two men to get their B.A. degrees.

The men and their lawyer said the agreement with the city was an effort to make sure something positive came out of the incident.

“We thought long and hard about it, and we feel like this is the best way to see that change that we want to see,” Robinson, one of the men arrested, said. “It’s not a right-now thing that’s good for right now, but I feel like we will see the true change over time.”

“I am pleased to have resolved the potential claims against the city in this productive manner,” Mayor Jim Kenney said. “This was an incident that evoked a lot of pain in our city and put us under a national spotlight for unwanted reasons.”