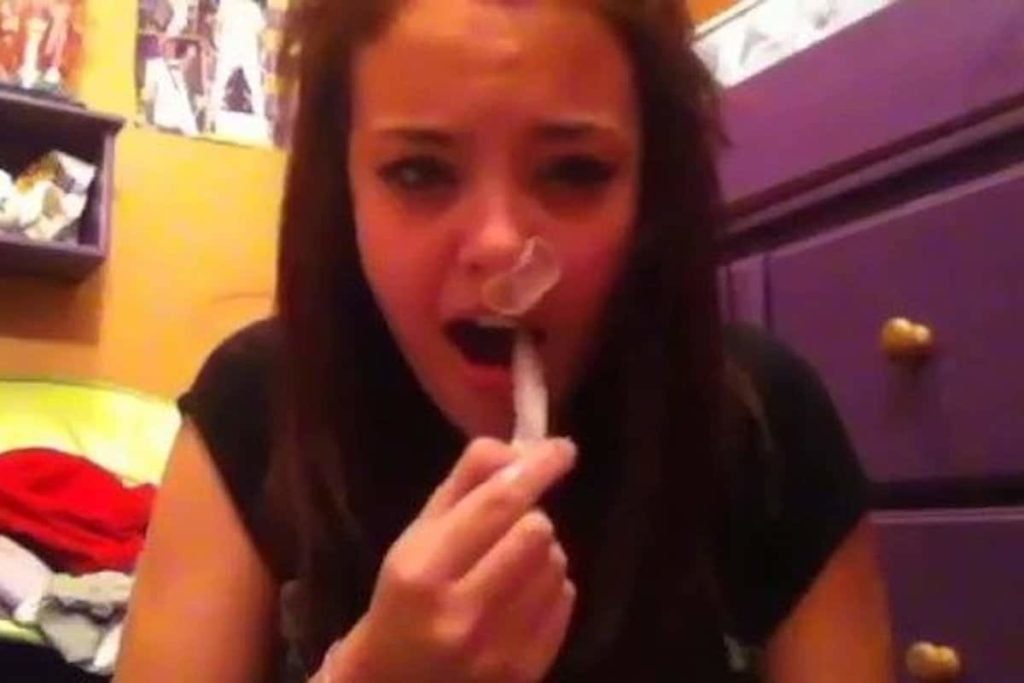 *Who, you may ask, is the dumb ass that thought this up? Well that dummy is no dumber than the teens actually doing it. They say that the Condom Snorting Challenge is not necessarily new, it has just “re-emerged” online and since teens are often looking for validation, they’ll do just about anything.

Even stick an unwrapped condom up their nostril and inhale until it comes out of their mouth.

Where’s a belt! Johnny-boy needs a healthy dose of whup-ass!

In San Antonio, Stephen Enriquez teaches drug and alcohol prevention. He told KABB-TV, “Because these days our teens are doing everything for likes, views, and subscribers. As graphic as it is, we have to show parents because teens are going online looking for challenges and recreating them.”

Of course these kids don’t think doing this is dangerous. But they’re dead wrong!

Bruce Y. Lee, a Forbes contributor and associate professor of International Health at the Johns Hopkins Bloomberg School of Public Health, recently wrote on the topic, saying, with the exception of doctor-prescribed nasal sprays, “anything else that goes up your nose can damage the sensitive inner lining of your nose, cause an allergic reaction, or result in an infection.”

He also warns that the condom could get stuck in the nasal cavity or the throat and cause someone to choke.

But according to one teen narrating the video below, this “new trend” is so last year…or longer. She says the media caught hold of it after learning about Enriquez’s video, and went nuts.

So now, according to her, I guess I’m the dumb-ass for writing about it.

But let’s carry on…Apparent, Enriquez’s talk had very little to do with condom snorting. In fact, she says he only mentions it once. She also adds that many of the condom snorting videos on social media are from 2013 or before.