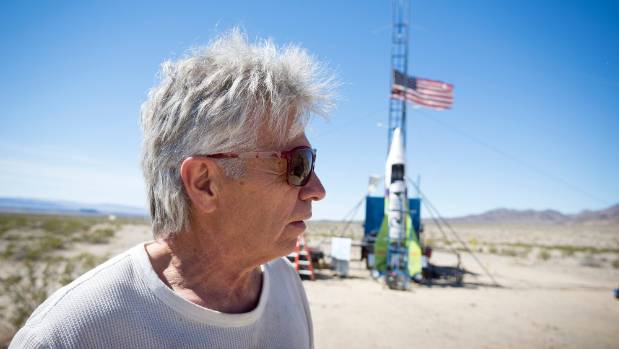 The launch took place near Amboy, California, a desert town ? about 200 miles east of Los Angeles. It wasn’t easy scheduling the brave (or crazy, depending on where you’re coming from) attempt.

Take a look at the launch for yourself.

Hughes initially planned to launch last November, but ran into was problems several times because of logistical issues with the Bureau of Land Management and mechanical problems that kept popping up, according to NBC.

Hughes reached a speed that Waldo Stakes — who has been helping him — estimated to be around 350 mph before pulling his parachute. He was dropping too fast, though, and had to deploy a second one. Hughes landed with a thud and the rocket’s nose broke in two places like it was designed to do.

“This thing wants to kill you 10 different ways,” said Hughes, who had an altimeter in his cockpit to measure his altitude. “This thing will kill you in a heartbeat.

This has been quite an undertaking for Hughes, a 61-year-old limo driver, who lives in Apple Valley, California. He’s seen a flurry of reaction to his plans, with detractors labeling him a crackpot for planning the launch in a homemade contraption and his belief that the world is flat.

Of course his escapade met with its share of ridicule and cynicism. With folks posting things like “He’ll be fine” beside a picture of Wile E. Coyote strapped to a rocket.

“I hope he doesn’t blow something up,” retired NASA astronaut Jerry Linenger — who orbited the globe more than 2,000 times during four months in 1997 — said after Hughes’ plans captured widespread attention. “Rocketry, as our private space companies found out, isn’t as easy as it looks,” he added.

But Hughes seems to be taking it all in stride.

“Am I glad I did it? Yeah. I guess. I’ll feel it in the morning. I won’t be able to get out of bed. At least I can go home and have dinner and see my cats tonight.”

In the future Mr Hughes wants to build a ?Rockoon? ? a rocket that is carried into the atmosphere by a gas-filled balloon, then separated from the balloon and lit ? which would take him about 68 miles up.

He also plans to run for governor of California.