It didn’t take long for posts from family and friends all over to come pouring in, offering heartfelt condolences.

McDonald was signed by Def Jam Records and teamed with legendary songwriter Diane Warren (…a judge on…Oprah’s Karoaki Challenge) and producer Rex Rideout. He wowed urban adult contemporary radio with his auspicious debut song, “Miracle,” and made additional appearances on Oprah. Unfortunately, an album did not follow, and we heard only sporadic singles from him over the years (most recently, 2016’s “Better“), though he was able to tour the world as a performer.

In the article 10 Reasons Why We Love Abraham McDonald Essence.com wrote…

He knows how to persevere.

…as they quoted a humble Abraham McDonald: “Last July, I was uncomfortable how comfortable I had become, and in late 2008 I had lost everything. My job started folding, I brought a truck and it got stolen the day the first car note was due. I was like, ‘Well I’ll be damned,’ and everything started going haywire. What was beautiful is that it forced me into a sabbatical, and that was a great place for me to look for my source and a place a peace. I began to ask myself what would I do everyday with full bliss and still not get paid? The only thing I could think of was to sing.”

His music is honest R&B:

“I feel something when I hear people like Gladys Knight, Phyllis Hyman, Patti Austin; these artists can tell a story, and that is what I know I can do. These are the singers that made me want to sing, I never forget music that makes me feel, like Jennifer Holiday “I Am Love.” I’m here to tell those stories,” McDonald stated.

Teachers, family and friends of the singer placed their condolences on Facebook following the news of his passing.

“Didn’t sleep well last night kept waking up thinking about my nephew and that bright smile he always had. He was an angel passing through.”

This is the most heartbreaking sad and shocking news imaginable! May dear Abraham McDonald rest in peace and sing with the angels! I knew Abraham as one of my students at Hamilton High Music Academy and then again as a co-worker at 32nd USC Magnet School. An amazing person and incredible Talent! I am so very sorry for our loss!” writes Ujazi Colomee

Two of his former school mates also chimed in…

“Abraham McDonald was my friend since high school and was always such a big, lovable teddy bear, who could saaaaang his butt off!,” says former schoolmate, Azja Pryor, who attended Hamilton High School, a performing arts academy in Los Angeles, with the beloved crooner.

“We watched him do it throughout high school and after… walk in with a smile and a voice that would light up any room, any auditorium, any venue and leave you with an energy and a love that was infectious,” said Mieko Jackson, another schoolmate.

“I don’t know what happened! I used to rep him and he was a friend.”

Services for the beloved singer are set for this Saturday via the flier below, sent to me by his sister. The public is invited. 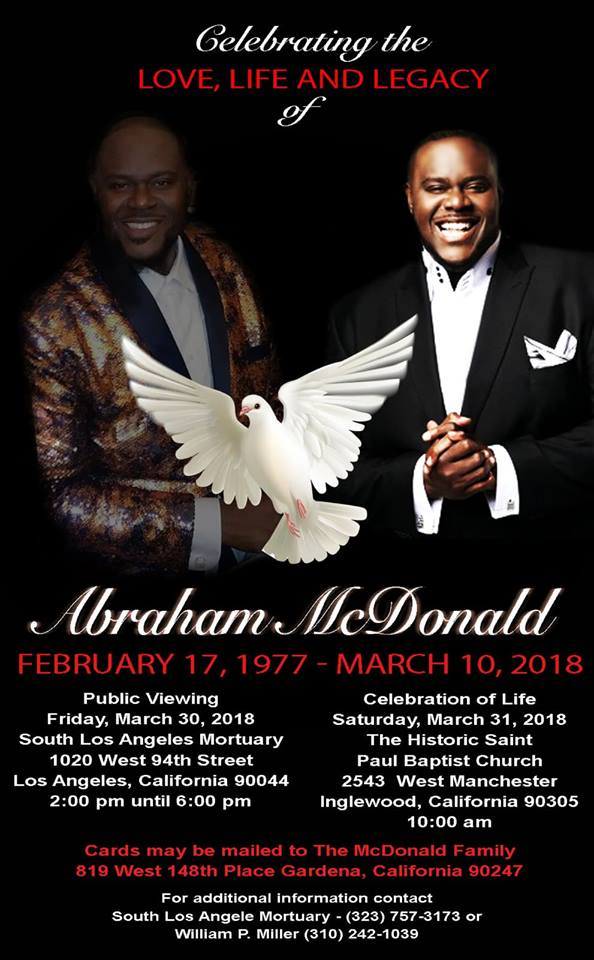 Hear Abraham McDonald’s angelic voice in the song, Miracle, below.