*Imagine you were just awarded custody of your infant daughter, but when you take her to the airport to fly her home the airlines says you can’t take her on board.

This is what happened to new dad Rubin Swift, who flew from Ohio to Phoenix to get his baby daughter after he won custody. Swift claims he had made arrangements with the airlines — who say they have a policy that a child must be older than seven days to fly. He even made sure to have the infants birth certificate and a note from her pediatrician, clearing her to fly. But when he arrived at the gate, none of that mattered to the agents.

To make even bad matters worse, he couldn’t get an immediate refund and had no funds to rent a room in a hotel or even a car.

Thankfully, this was not a problem for long.

The kindness of one stranger changed everything.

?I asked for my money,? Swift told reporters. ?They said it would take seven days to get your money back.?

Swift had to think fast. He remembered a woman, a kind volunteer who had helped care for Ru-Andria when she stayed in a NICU unit in Phoenix. Her name was Joy Ringhofer.

He placed a call to her and was bowled over when she offered to take him and his daughter in until a new flight could be booked.

?I didn?t expect her to say, ?I?m coming to get you and take you home,’? he said. ?So, I?m thinking, She is going to drive me back to Cleveland…but she actually brought me to her house ? feeding me and making sure my baby is all right.

Now the two have become like family, and in a video Swift clearly has grown to love this grandma type Caucasian woman, who he says never once looked at his race.

?We?re two different colors and she opened up her door and it never was an issue,? Swift added about Ringhofer, whom he now refers to as his daughter?s grandma. ?My color was never an issue. She loves my baby. She held her. My baby was with her all night. Who does that?? 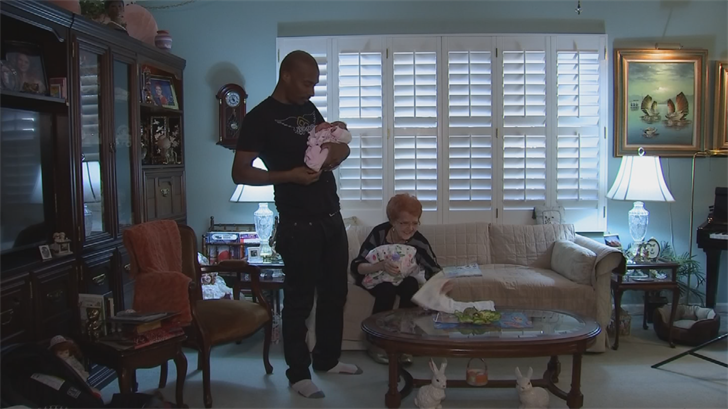 ?I had such a strong feeling that I needed to do this for him,? Ringhofer said.  ?I know he was a kind and safe man to have in my home and he has been a perfect gentleman.?

Father and daughter were eventually cleared to fly home, and Frontier Airlines issued this statement to AZFamily.com.