*This is the kind of story that reminds us to keep our business to ourselves. Keiauna Davis of Wilkinsburg, Pa. may be alive today if she had adhered to that practice.

A witness told police that Davis had just received $3000 cash Thursday morning from her income tax return. Davis had the money deposited into the witness? bank account and collected the money from the witness during her lunch break at the Dollar General where Davis worked.

Police say that Davis left work on foot, and was followed by two men in a Toyota Corolla.

Now three people are behind bars after being charged with her murder.

According to reports, police responded to a complain of shots fired and found Davis lying on the sidewalk suffering from a gunshot wound. She was rushed to U.P.M.C Presbyterian Hospital where she died.

The two men in the car were identified as Kaijin Scott and Dane Taylor. A third suspect, Laya Whitley, worked with Davis, but was not in the car. She was apprehended later after authorities learned she and Davis had worked the same shift, and saw texts between her and Taylor on her iPhone. 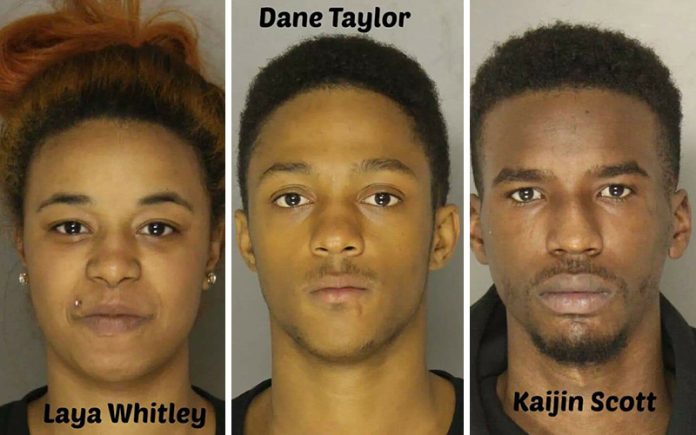 The Toyota, being driven by Kaijin Scott with Taylor riding shotgun, pulled in front of Davis — who was on foot — at the 1700 block of Laketon Road.

Taylor got out and chased her, while Scott pretended to be changing the car’s tire.

Taylor caught up with Davis and a struggle ensued. It was then that Scott produced a gun, fired several shots, one of which struck Davis.

Davis’ purse and phone had been snatched by Taylor, who threw it out of the car after they fled.

An update Saturday from police said the suspect Taylor had not originally been arrested and had a warrant out for his arrest but was then apprehended Saturday by police.

Watch the video report of the story directly below.