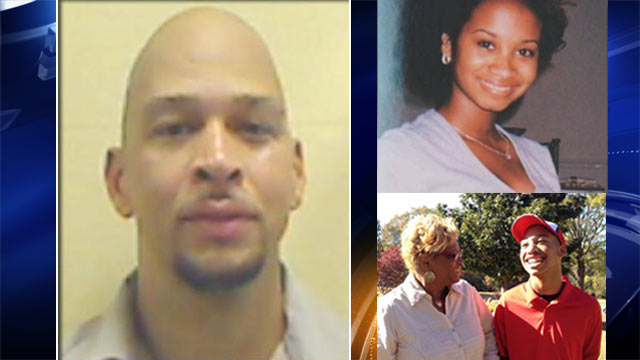 *Such a play on words. Rae Carruth, a former wide receiver with the Carolina Panthers, has been in prison since 2001. He was convicted of conspiracy to commit murder along with other charges, after he paid a man to shoot Cherica Adams, his eight-months-pregnant girlfriend, who ended up dying a month after her son was delivered via emergency C-section.

Carruth will be out of prison in eight months, but recently, he granted a prison interview, his first in years.

No doubt his mouth was moving, but the words coming out of that hole in his face, even on paper, appear to be anything but sincere.

But let me back up for a minute, and catch you up on a bit of history.

Adams, who was shot four times, had a son named Chancellor Lee. The boy was born with permanent brain damage due to a lack of oxygen. He is now 18 and has been living with his grandmother, Cherica’s mother, Saundra Adams, since he was born.

Carruth decided to pen a letter to the kid’s grandmother. But instead of sending it to her, he decided to send it to the media. Why? Because he says this way he can publicly let everyone know that he has apologized “for the death of her daughter,” and she will no longer be able to say that “he has never apologized.”

The 3,000-word handwritten letter was sent to WBTV in Charlotte, but it was addressed to Saundra Adams. Carruth also  agreed to an on-the-record interview with reporter Sarah-Blake Morgan via telephone.

According to the Associated Press, Carruth included a cover letter saying that he?s ?accepted my lot as a social pariah,? but that he wanted to debunk the lies he believes Saundra Adams has told about him.

Her then thanked Adams for the ?unconditional care, compassion, love, and support? that she has ?showered? Chancellor with since he was born.

Carruth met his son twice when he was little.

?I feel like if I did it in the open, it would put an end to the lies. If I say publicly, ?Ms. Adams, I apologize. Ms. Adams, I take responsibility for what happened,? that she can no longer get on television and do an interview and say ?Rae has never apologized to me,? ? Carruth told the reporter, Morgan.

He refused to speak specifically about the night Cherica Adams was shot. Instead, he offered the play on words below; which I referred to at the top of this article.

So, to be clear, I personally take issue with his wording. “I apologize for the loss of her daughter. HER DAUGHTER WAS KILLED BY SOMEONE YOU HIRED. A “loss” refers more to someone who has passed away. Not someone who was murdered.

The “impairment” of your son? Really, Carruth?

The son you wanted dead. Which was the reason you shot her.

In  his letter Carruth told Saundra Adams he wants to help care for his son once he gets out of prison, and was sure to mention that she would not live forever.

Saundra Adams told WBTV that Carruth will ?never? have custody of Chancellor.

Of course 17 years in jail will give a person a lot of time to reflect. Listen to some of Rae Carruth’s phone interview with reporter Sarah Blake Morgan here.

Take a look at Chancellor in the video below. He is such a handsome young man, surrounded by a lot of love and support. Hard to believe that his father wanted him dead. He has such a fighting spirit!

One thought on “Rae Carruth, Former NFL Star Turned Killer, Tells Mother of Woman He Had Killed, ‘Sorry for the Loss of Your Daughter’”