*I kid you not. It’s gross, but you are not going to believe this! A 28-year-old Oregon woman named Abby Beckley was working on an Alaskan fishing boat back in 2016 when she felt something weird in her eye. We can relate to that, right? Perhaps a speck of dust or a stray eyelid.

It was really irritating her so she picked at it. That’s when she pulled it out…a worm!!!

?I put my fingers in there in kind of a picking motion and I pulled out a worm,? Beckley told BuzzFeed. ?I looked at my finger and it was moving and I was shocked.?

But wait! The woman didn’t go to see a doctor until one week later!

During that time she pulled SIX MORE WORMS from her eyes.

After doctors she consulted with continued to scratch their head in sheer amazement, Beckly went to the Centers for Disease Control and Prevention, where the worms were identified as Thelazia gulosa, a parasite typically found on cow eyeballs.

?I was living with these things, and I?d just keep pulling them out when I?d feel them,? she said.

If you need further proof, look at what’s on Beckley’s finger, pictured below. 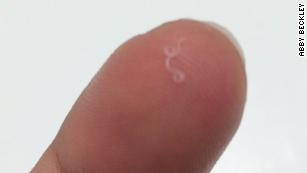 Richard Bradbury, team lead of the Parasitology Reference Diagnostic Laboratory at the CDC?s Division of Parasitic Diseases and Malaria, told CBS News that 14 worms were removed from Beckley?s eye over a 20-day period.

Doctor’s say there’s probably no permanent damage, but they certainly empathize with the trauma this young woman must feel.

Doctors believe Beckley was infected when a fly landed on her eye while she was traveling through cattle fields in southern Oregon, according to USA Today.

This is only the 11th case of a human being infected in North America.

One thought on “Woman Thought Prickly Feeling in Her Eye Was Stray Lash, Turned Out to be Worms…14 of ‘Em!”