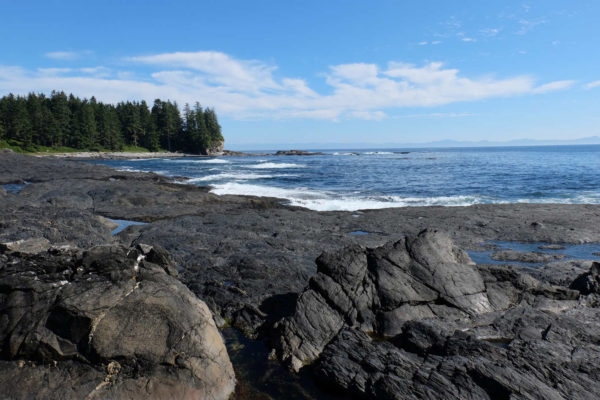 *OK, if this doesn’t creep you out, nothing will.

High tides be damned. You never know what a busy doggie might sniff up. Taz, a 6-year-old Rottweiler walking along the beach off British Colombia with his owner, Mike Johns, is used to all the wildlife that comes in with the tide. But on this day he smelled a rat. Well, something very unlike the usual debris from fish and birds.

When his owner followed him to further inspect what Taz was agitated about, he was shocked to see a tibia and fibula attached to a left human foot…

…with a white ankle sock in a black running shoe.

Go ahead. I’ll wait while you read that again.

As shocking as this may be to us, its apparently no biggie to the residents of British Colombia; where, according to a report in the New York Times, the find has become so common that tracking …as in “where did this one wash up” has been put into place.

Makes sense, seeing as this foot was the 13th one to wash ashore since 2007.

?It?s just a freak thing that it happened to be here,? said Mr. Johns, 56, who lives in Jordan River, a surfer?s village about 70 miles southwest of Vancouver, Canada.

Eww…would you actually touch such a thing? After he called the police, Johns said he used a stick (still gross) to pick the remains up; concerned that if it remained on the beach, it would have washed back into the ocean or attracted the bear hanging around town or an eagle from the nearby nest.

The remains were picked up by the Royal Canadian Mounted Police on Friday, according to the authorities, who will hand it over to be inspected by the Coroners Service of British Columbia.

?We?ll try to get a DNA sample,? said Andy Watson, a spokesman for the service.

One thought on “Human Foot, the 13th One, Washes Ashore in Canada…Yet Fazes No One”