Readers: Check out the trailer for Curtsy Mister: The Story of A Little Boy That Got Trapped In A Pair Of Slingbacks directly below.  Let Angela(and I) know what you think in the comments section on this page! I am sure this filmmaker will appreciate it, and you know I will!

Thanks for taking the time to be with us, Angela! We look forward to seeing more of your work behind and in front of the camera!

UPDATE: View the trailer for Curtsy Mister directly below.

Who would you like the SPOTLIGHT to be on next? 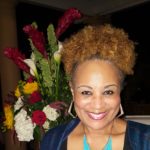 DeBorah B. Pryor is a veteran entertainment journalist, entrepreneur, former actor and educator whose original communications workshops, Public Speaking for the Private Person (Now available on CD) and How to Talk to Anybody II has been taught at UCLA Extension. A new author, she recently completed her first nonfiction book, which talks about her experiences while driving for Uber. Follow her via EURThisNthat @pryor_deborah, on Facebook at DeBorah B. Pryor or if you’d like a copy of the CD, at [email protected]