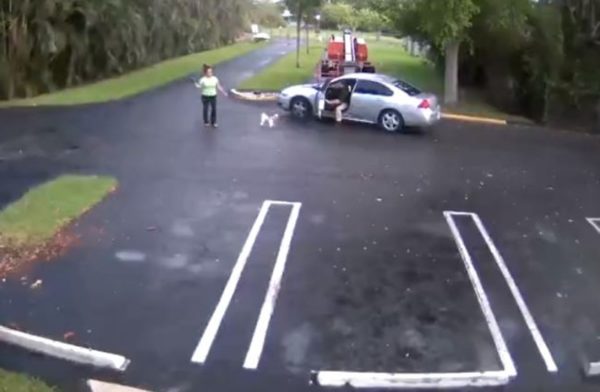 *A Boynton Beach, Fla. deputy who was known to have consistently received excellent annual evaluations apparently snapped on October 12, when he showed up to confront his ex-girlfriend as she walked her dog Coco at the Inlet Harbor Club condominium complex; argued with her briefly then shot her once in the arm and twice in the chest before turning the service gun on himself

He was on duty.

Michael DeMarco, 55, had been known as an exemplary officer who ?Copes effectively with pressures and tensions,? according to what one superior wrote on his annual evaluation in 2001.

Yes, that may have been the case 17 years ago — but apparently similar evals followed through 2011 – after which no evals of him appear to be on record.

According to recently released documents, the victim, Yuly Solano, 41, had been dating DeMarco for approximately seven months.

A portion of the terrifying incident, caught by surveillance video, was made public by the Boynton Beach Police Department (scroll down).

In the video we see DeMarco exiting his car as Solano walks by with her little dog at the Federal Highway complex.

Although DeMarco was on duty at the time, he was in an unmarked car, but in uniform.

We see the two walk off camera for a bit, but then reappear. This time, DeMarco is pointing a gun at the woman, who is backing away in fear.

Fortunately, Solano, who was rushed to Delray Medical Center, survived the shooting and recovered fully.

Solano told investigators before DeMarco shot her he said, ?You treat me worse than a dog.?

According to a report in the Palm Beach Post…

Nothing included in hundreds of pages of DeMarco’s personnel file at the Palm Beach Sheriff’s Dept. indicates he was capable of such violence.

DeMarco had a 22-year tenure with the sheriff?s office, and his superiors praised him with letters of commendations, according to a review of the deputy?s internal affairs records.

The Post reports in a Nov. 8 hospital-bed conversation with detectives ? apparently the first time they could talk to the severely injured woman ? Solano also said she?d ended their relationship a few weeks before the shooting ?because he was being racist and very possessive of her.?

Solano also told detectives she had planned to file formal complaints about DeMarco with the condo board and property managers but had not gotten around to it before the shooting, according to the documents.

The interview is part of a 65-item package of materials released Friday. Boynton Beach police had released 160 pages of documents Nov. 6, and said the remainder were withheld at the time because police hadn?t yet been able to interview Solano and so could not close the case.

Watch the video clip below. Some may find it disturbing.

One thought on “On-Duty Deputy Shoots Ex-Girlfriend, Then Turns Gun on Himself (Video)”