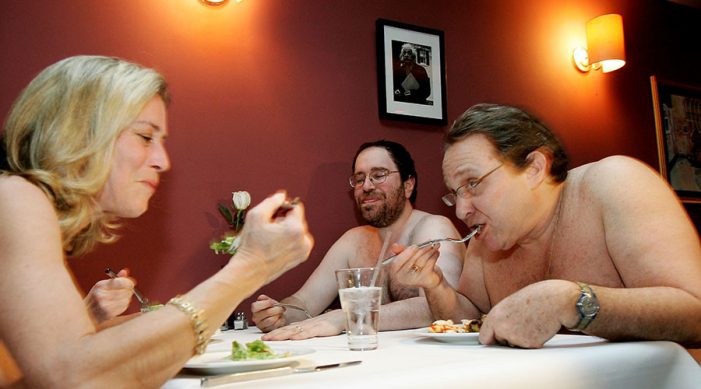 *If you’re thinking, “That’s just nasty!” you will get no argument from me. Let’s be realistic about how difficult it would be to re-imagine naked people, all shapes, cultures, sizes and smells breaking bread together…as hard as we might try. But a restaurant in Paris, where else, has opened and clothing is not allowed.

Aptly named O’Naturel, the restaurant began taking reservations earlier this month, and bills itself as the city’s first naturist cafe, welcoming nudist diners in the 12th arrondissement of Paris.

“When you enter the restaurant, there is a locker room where you must leave your clothes,” Yves Leclerc, the president of the French Naturist Federation, told ABC News.

Leclerc, who said he and other members of the federation dined at O?Naturel last week claims…

“It feels like we are about to jump into a swimming pool. But in fact, we are preparing for dinner.”

Leclerc also admits “It?s a little surreal to eat naked in the middle of Paris.”

In spite of what we might think, the restaurant does adhere to some degree of hygienic conscience (and French Law). Servers and cooks in the restaurant must wear clothes, and the chair covers are changed in between each sitting.

The list of rules for diners, posted at the entrance of the restaurant, reads:

Mobile phones and cameras are prohibited in the dining room, and exhibitionism and disrespectful sexual behaviors are not tolerated.

Reportedly, the French Federation of Naturism claims upwards of 3.5 million people — including 2 million foreign tourists — practice naturism in France every year; so more restaurants of this kind are expected to open…

…I doubt if this will catch on here in the states though. Face it, we just think differently about this stuff.

But then again, I could be wrong. Would you eat at an all-nude restaurant?