*This is absolutely heartbreaking. And once you accept that, you’ll probably get mad as hell. A dad in Nevada fatally wounded his 14-year-old son because he was gay.

According to the teen’s former foster mom, Sonja Jones, 53-year-old Wendall Melton walked in on his son, Giovanni Melton, who was with his boyfriend and shot the boy dead.

Giovanni lived in the apartment where the incident took place alone (which is weird in itself. How does a teenage boy live alone in an apartment?).

The teen was alive — but in critical condition — after being shot. He was taken to St. Rose Dominican Hospital?Siena Campus initially, according to the Henderson Police Department, but died soon after. The police dept. put a statement on Facebook saying, ?As a result of their investigation, Henderson Police detectives determined that Melton discharged a firearm that fatally struck his son.?

Jones told police the shooting was after an argument between the two and added this was not the first time the father and son had argued about Giovanni’s his sexual orientation.

According to Jones, Melton “hated the fact that his son was gay.” Then she offered this incredibly frightening POV. “I’m sure that in his mind he would rather have a dead son than a gay son.” 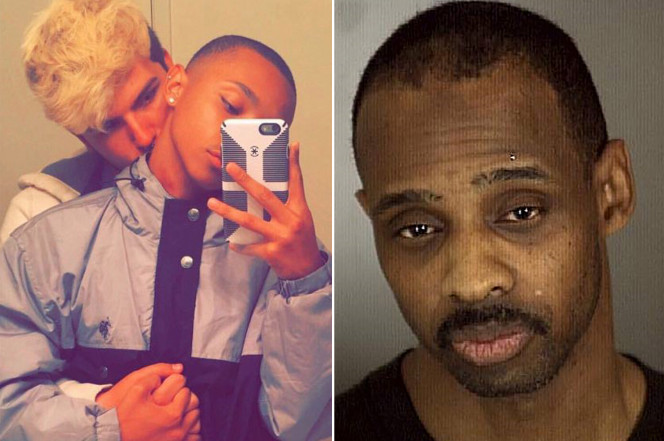 Melton was arrested at the scene on felony charges of open murder, child abuse, firearms possession and other various charges, and was booked into the Henderson Detention Center.

“Giovanni was abused physically and mentally and spiritually for many, many years,” Jones told News 3 Las Vegas.

“We have a crisis of masculinity in this country?it’s obvious across the board in this report and in the unrelenting reports on sexual assault and also gun violence,” Grant said in a statement provided to NBC News. “Many ‘normative’ messages men learn as they are growing up about stuffing their feelings, policing other men’s gender and sexuality, asserting ‘dominance’ from the boardroom to the bedroom, also show up in their lives as fathers.”

I totally agree with Mr. Grant. This beyond disturbing incident that shows such low regard for human life; and such hate and obvious lack of ability to accept our children as they are is a sickening display of homophobia. This was a child still in his growing years. And whether he chose to remain gay for the rest of his life, or just experiment now while he’s a teen, he should have been allowed to do just that. How dare someone take it upon themselves to end a life — ANYONE’s life — because they are not living it by your standards!

Can you imagine the trauma of his young boyfriend, who was allegedly there witnessing this? This kid will need therapy for a long, long time.

Jones, obviously disgusted by Melton’s actions said, “I hope they throw the book at him. I hope he never sees the light of day. I hope every day when he looks in the mirror, he sees his son’s face.”

One thought on “Teen Killed By Homophobic Dad: ‘He’d Rather Have A Dead Son Than A Gay One!’”