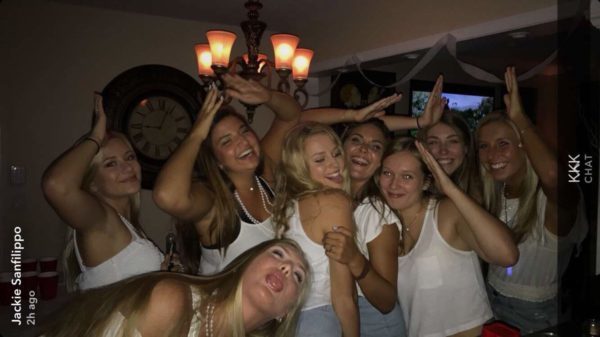 *The parents of six girls whose photo caption “KKK” showed them smiling broadly with their hands above their heads signifying who knows what is suing the Barrington School District for defamation.

The photo ignited a firestorm on social media over the summer and based on the infamous letters used as the caption, we don’t have to tell you why.

But the parents say everyone got all up in arms based on assumption. Why did they take so long to come out with this? Who knows.

The photo was retweeted and shared thousands of times, with some in cyberspace interpreting the girls’ gestures as mimicking Ku Klux Klan hoods. Officials at Barrington Community School District 220 were inundated with demands to take action against the girls.

The “white-out” themed party with the girls in attendance was said to have taken place off campus. But as it turns out, white-out only applied to the color of requested attire.

Guests at the party were said to be of all races and cultures. And as for those letters “KKK”…

They were actually the initials of the party host.

The lawsuit, filed in August on behalf of six of the girls by their parents, seeks unspecified damages. An attorney representing the girls and their parents did not immediately return phone calls.

The lawsuit also points to statements Principal Stephen McWilliams reportedly made to a small group of youths who protested the photo outside the school on July 14. The suit claims he “championed the (protesters’) cause” with comments such as the image “burns me to my core.”

“These damaging accusations, originating from careless, peripheral online commentators, were made exponentially more effective by the public endorsements of the superintendent and principal,” the lawsuit said. “Such statements will undoubtedly inhibit the (girls’) future educational and career prospects as well as their future earning potential.”

No word, nowhere, as to what the hand signs over the head means.

Read more about the lawsuit here