*Disturbing video clips were revealed on Snapchat that show white football players from middle school in a locker room, dry humping their African American counterparts while yelling racist epithets such as “We’re gonna f**k the black off these African American children from Uganda!”

Needless to say, Black parents are beyond incensed.

The incident occurred at Short Pump Middle School in Henrico County, Virginia and reports say when the school district was contacted they said they were aware of the video and are dealing with it “appropriately.”

Thing is, the district has been “aware” since Monday. School officials did pen an open letter to parents, but many of them are wondering why they waited nearly a week to do anything.

In the video, acquired by WTVR’s Brent Solomon, the portion he decided to share obscures the faces (and disguises the voices) of the perpetrators and victims because they are all minors.

Can you believe this? Minors!

Solomon, who has viewed the tape in its entirety, says the video — which has gone viral — starts with the question, ?Ever wonder what happens in a football locker room??

We can also hear another student shouting, “What’s up with the blacks?”

At first I wondered how the Black students allowed this to happen. I mean, why they didn’t just turn around and kick these muthaf**kers asses.

But then I learned they were overpowered and can even be heard pleading to be let go.

One Black parent, who wants to remain anonymous to protect her kid from even more abuse, told WTVR that all the Black football players were held down on the floor while their white teammates ?dry humped them? and shouted racist comments. 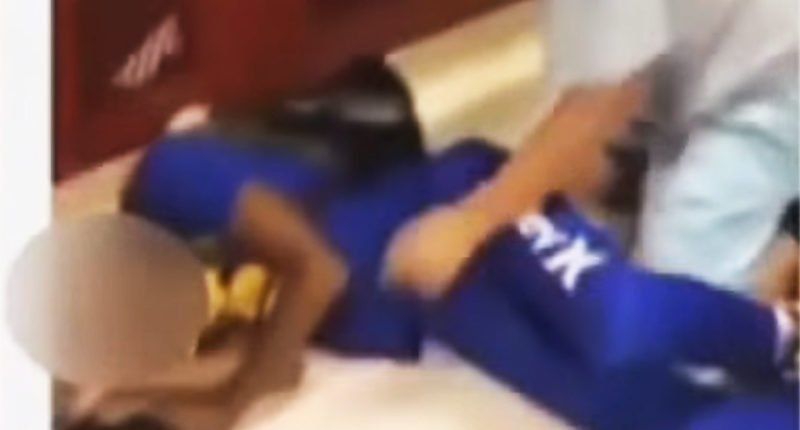 NBC12 reports that in the open letter written to parents, principal Thomas McAuley called the actions in the Snapchat clips ?appalling, disturbing and inexcusable.? He adds that he hopes to put procedures in place to prevent such things from occurring again in the future.

?We will include staff, parent, administrator and student representatives in this dialogue,? the letter reads. ?Our hope is to use this very unfortunate event as a meaningful learning opportunity.?

In the meantime, how are these perverted white boys going to be dealt with?

The remainder of the season is a no-go for the Short Pump Middle School football team because of this. Yet officials said they will continue to hold practices.

?A mandatory component of practices will be discussions that focus on reporting responsibilities, accountability, ethics, sexual harassment and racial tolerance.?

Henrico Supervisor Tyrone Nelson, an African American man, said he is pleased the school system is taking action and said the parents had a right to be angry with the video.

Surprisingly, he even wondered if the boys were playing.

Clearly, they were not. There is a time and a place to be gracious in your perspective, sir. This wasn’t one of those times.

?Was this some kind of racial situation?? Nelson questions. ?If it?s young kids being held against their will and being sexually manipulated, then that?s one thing.?

?They were not okay with it,? the anonymous parent stated, responding to Nelson’s line of questioning. And in defense of her son she said, ?He had people straddling over top of him. Racism should not be tolerated … You should be able to send your kids to school and feel they are being protected and safe.?

This is a travesty. Of all the hateful and perverted acts to commit, these white middle school males simulate sex on Black boys. What the hell is happening with these children? Where are they getting this behavior from?

See the video clip below. WTVR also edited out some of the graphic sexual activity.