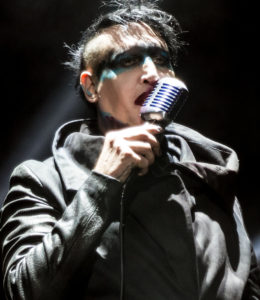 Although Marilyn Manson has essentially made a career out of shock and gore, he probably never expected his antics to translate into real life terror. But during his September 30th show at the Hammerstein Ballroom in New York City, a poorly secured stage prop resulted in a major accident that horrified both the singer and the crowd.

The incident, which was captured on video, showed Manson grabbing onto some metal bars situated between two large prop pistols on stage during the start of his cover of “Sweet Dreams (Are Made Of This)” by the Eurythmics. Unfortunately, the situation quickly turned into a nightmare when one of the pistols fell onto Manson’s leg, breaking his fibula in two places and bringing the show to a screeching halt.

Manson told Yahoo, “I only recently watched the video of it. I can see how it could look terrifying. It was terrifying for me, because the truss was not secured properly.”

Manson was rushed to the hospital, making his one of the approximate 110 million ER visits that occur every year. After being X-rayed and examined, the singer had a plate and 10 screws inserted into his fibula, with another in his ankle, before having a cast put on and sent home to LA to recover. Although the median number of days away from work due to occupational injuries in 2015 was a mere eight days, Manson will require much more time. The singer had to cancel several shows on his national tour to get the rest he needs, but most have since been rescheduled. He will kick off the European leg of his tour in November, with rescheduled U.S. dates taking place in January and February of 2018.

“It definitely could have crushed my skull and my ribs,” he said. “I have some minor bruising in that area, but it took six guys to pull it off of me… [It happened] as I was about to put it into second gear,” he added, “I’ll be back there really shortly, and it’s going to be as exciting as it was starting out.”

Manson is far from the only rocker who’s sustained a serious stage injury. In 2012, Lady Gaga was accidentally struck with a giant metal pole onstage by one of her dancers, and Foo Fighters drummer Dave Grohl fell off the stage in Sweden during a show and broke his leg. In both instances, the show went on. The extent of Manson’s injuries left him with no such option, as he had to be carried out of the venue via stretcher.

Tickets for most of the singer’s original performances will be honored at the rescheduled shows with the exception of his intended October shows in Phoenix, AZ and Columbus, OH. Ticket holders for those shows should bring them to the point of purchase for a refund. Tickets for his newly announced concerts go on sale October 20th.