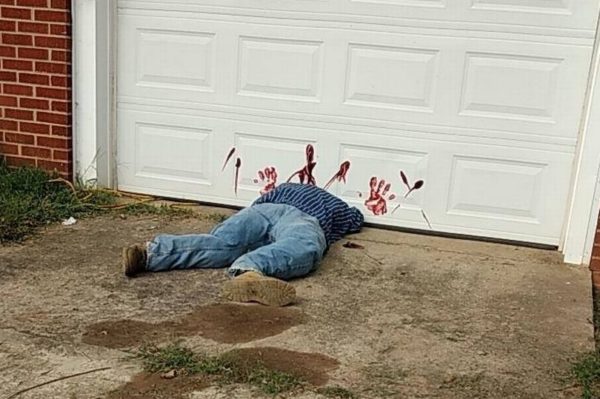 *Warning graphic! And you thought our men in blue couldn’t stoop any lower? Think again!

Apparently people have been bombarding 911 after witnessing one of the most gruesome sights you could ever imagine.

Right there, in front of a garage, the body of a decapitated human amidst a LOT of blood.

But wait! Before you bombard the EURThisNthat comments section to ask why in the hell we decided to reveal this gruesome sight…hear us out first.

When Johnny Riddle called the Greene County Sheriffs Department on Wednesday he was clearly beside himself.

Truth be told: His neighbor made Halloween come early by placing a very life-like doll’s body.

When deputies showed up at the home of Joseph Lovergive, (yep! That’s his real name!) the designer of the “tragic display,” they saw that the ?body? was nothing more than a Halloween decoration that the homeowner had put out more than a month early.

They decided to share the “gruesome” image on Facebook soon after, with a warning for residents NOT to ?call 911 reporting a dead body.?

?Instead,” they suggested, “congratulate the homeowner on a great display.?

Take a look at the comments from online spectators and see the video report directly below.