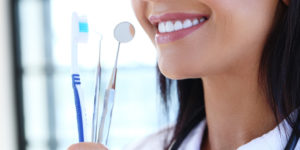 Dental hygiene is important. It has a major impact on the overall health of the body, and making sure that you clean your teeth often and properly is one of the cornerstones of dental hygiene. It’s also one of the easiest and most widely known ways to keep teeth healthy. However, despite this, more than 40% of children have cavities by the time they reach kindergarten. And the reason might be that we’re all brushing our teeth completely wrong.

According to Dr. Luke Cronin, even if people have been brushing their teeth twice a day, they might need to work on their brushing technique. He recommends that people invest in a quality toothbrush, preferably an electric one. This is because an electric toothbrush will glide over teeth instead of harshly brushing.

“Hold the toothbrush at a 45-degree angle (downward for your bottom teeth and upward for your top teeth) and by using a gentle circular movement the bristles will clean under the gum line where plaque can reside,” Dr. Cronin said. “If you have an electric toothbrush, you will only need to hold the brush at a 45-degree angle and move the brush along your top and bottom teeth.”

The dentist also suggests that people shouldn’t rinse with water after brushing or using mouthwash. This has the negative effect of rinsing away all the fluoride that was intended to aid in protecting the teeth. He also believes that brushing before eating breakfast is better than brushing after if one is in a hurry.

Dr. Cronin also suggests waiting at least 30 minutes after eating or drinking to brush. This will prevent damage to the enamel as some foods might weaken it temporarily.

“This is particularly important after acidic foods and drinks,” Dr. Cronin said.

The dentist also recommends that people do something distracting, like watching TV, while brushing. This is because most people don’t brush for the recommended two minutes, instead only brushing for 45 seconds. The TV will give something to do while engaging in an otherwise repetitive activity.

“By walking around the house or watching television while you brush your teeth, you?re more likely to spend the recommended two minutes,” Dr. Cronin said.

One thought on “Have You Been Improperly Brushing Your Teeth? This Dentist Believes So”