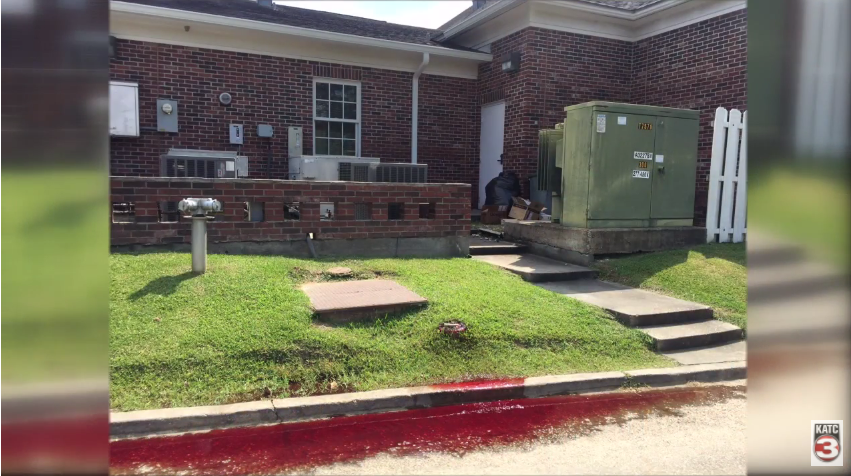 *Oops! Neighbors in a Baton Rouge, LA neighborhood awakened to a horrendous sight on Thursday: Blood seeping out of the local funeral home.

Gruesome-looking photographs show the red liquid trickling onto the street from a valve outside the Greenoaks Funeral Home in  Baton Rouge.

Trickling from a valve? Now tell me, you’ve watch enough TV, and no doubt seen your share of scary movies. What thoughts come into your mind right about now?

According to city officials, the cause of the bloody leak was a plugged up line; and the blood, which was mixed with an embalming fluid containing formaldehyde, (is this information we really needed?) began to leak from a storage tank located behind the building.

They store blood in funeral homes?? This is getting creepier by the second!

If this isn’t the nastiest crap you’ve ever heard, write me.

And get this, residents are supposed to trust that the fluid did not find its way into the sewer system. Why? Because city officials said so.

Just kidding. What purpose would lying about something like this serve?

Oh if only you could see my face right now as I pose the question.

?We sent out both our sewer inspector and our environmental specialists to take a look,? Adam Smith, of the City of Baton Rouge Department of Environmental Services, told WBRZ. ?We determined that it wasn?t a sewer issue and that it was an issue on private property.?

The funeral home is said to be under new management. At least this is the reason they have no permit, and have been since signed up to get one.

Dignity Memorial owns the property and apologized. ?As soon as we noticed it, we were able to immediately stop the leak, clean and disinfect the area,? it added via a statement sent to The Advocate.