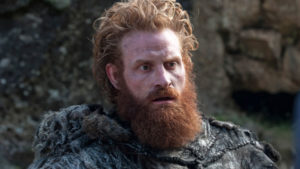 Sometimes an item or look becomes part of someone, to the point where one can’t distinguish them without it. It could be a particular piece of clothing, hair style, hair color, or just a way they move. The point is that it’s them, and when they lose it it’s impossible to see them the same way.

That was the case when Game of Thrones actor Kristofer Hivju, known for playing the fan-favorite character Tormund Giantsbane in the show, had pictures of himself without his iconic beard released online.

The character that the actor plays is well known for his iconic “wildling” look, with a big and bushy red beard that he states, in the show, is “kissed by fire.” It became so much a part of the actor that, when he shaved it off fans couldn’t believe he was the same person.

And with this big of a change, who could blame them?.

Despite the loss of the beloved beard, the fan reaction was generally positive, showing more amazement and disbelief than any discouragement about how he looks. Really, the man is quite handsome, beard or no. Some of the more vocal fans took to twitter and were featured in several news stories, exclaiming their surprises.

One fan wrote, “Tormund is my favorite character on GoT… I love that man with or without his beard.”

Others took a more fun approach to it and compared the character to the Disney Prince Adam, and the resemblance is there, admittedly.

Seeing different sides to people that we know or admire is always an interesting and shocking experience, but it doesn’t have to be a bad one. The man behind the beard is still the same, just a little less warm on cold nights. Many fans expressed their love for Hivju, and stated that they adored him, Tormund or no.

The timing is ironic considering that beards are all the rage now. When surveyed, 67% of 1,000 men in New York City said that they had a beard or facial hair of some kind.

And with members like Hivju in the bearded club, who wouldn’t want to join?