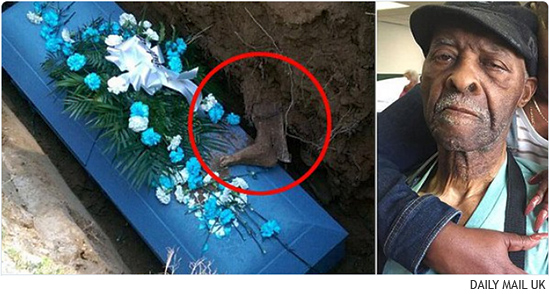 Dang! You mean they see this stuff EVERY DAY??? 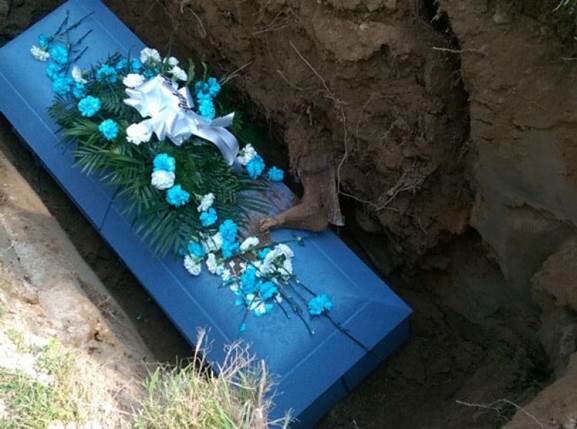 The family had apparently performed a brief eulogy at graveside before the limb was spotted.

?We all looked down and we were looking at what apparently was a human foot and leg wrapped in plastic, with cloth wrapped around it, sticking out on top of my father?s casket,? said Alonzo Butler, 53, an MTA bus driver.

A cellphone photo was snapped by one of the mourners. And what appears to make this bad matter even worse is that when the grieving family mentioned it to cemetery workers, they ignored the dangling foot and quickly filled in the grave.

But wait, there’s more. Even before all of this happened, a cemetery worked had dropped a cellphone and pack of cigarettes into the open ground. It was after a rake was used to retrieve the items, that the foot was seen.

?This is beyond heinous for anyone to witness during their time of grieving over a loved one,? said the Rev. Kevin McCall, crisis director with the National Action Network.

He called on New Jersey officials and police to ?investigate this despicable act immediately to uncover who is responsible.?

Of course the family is considering their legal options.

But get this, James Shmergel, the owner of the cemetery thinks too big of a deal is being made out of this whole thing. That’s him below pointing at Mr. Butler’s hastily covered grave site. 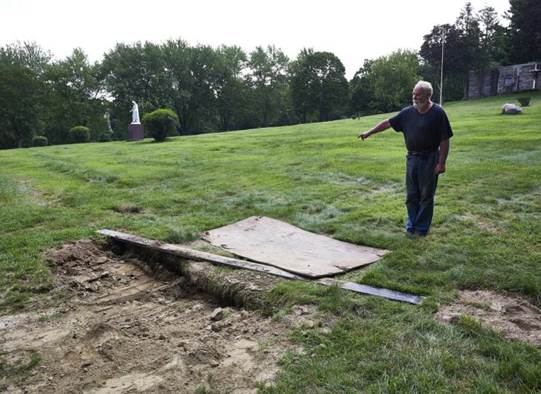 ?Is it newsworthy? In a cemetery?? asked Shmergel. ?Not really.? Meanwhile, cemetery caretaker Bill Plog insinuates there may be more of these kind of incidents, considering…

?There was a casket,? he said. ?It deteriorated. You can purchase a concrete vault, but people don?t. That grave there is from 1969 . . . It?s unfortunate that this happened, but this is a graveyard.?

And of course there is a reason why the grave was filled so quickly.

Alonzo Butler worries whether the corpse?s family is even aware of the indignity. Only a well-worn piece of plywood (pictured above) covered the grave Thursday.

?We were shocked,? Butler recalled of the incident. ?All we could say was ?Wow,? because that was a human, someone else?s loved one. I feel guilty seeing someone else?s family member like that.?