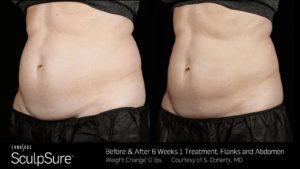 *Hear ye! Hear ye! There is a woman who was once skeptical about body contouring; but now, after getting it done first hand, swears by it. No more tire around the tummy. No more arms that wave when you do. No more bulk on the thighs.

And because of BET FB Live, well, a recording of it, we can watch the whole procedure.

Sculpt away, I say!

So this woman, what’s her name again? I don’t know and it doesn’t matter, got to ask Dr.  Arash Akhavan at the Dermatology & Laser Group, and a leader in his field, many of the questions we have wondered about when it comes to this new type of non-invasive surgery. With that, she offers “Everything you need to know about body sculpting.”

According to Dr. Akhavan, who is based in New York City:

?Basically everything over the last, I would say, five years, has been moving toward non-invasive stuff such as body contouring and away from liposuction. With liposuction you?re taking weeks off, and it?s taking months to see any sort of benefits, and then there?s the risk of surgery, scarring and all of that. With the non-invasive things, you do the procedure, there?s no anesthesia, there?s no cuts on your skin and the results usually come in within a couple of months,” Dr. Akhavan said.

So in the video we see him applying the laser to the “problem area” the woman has designated for target. He has already explained to her that she won’t feel any “excruciating pain” but she will have, throughout the 25-minute-procedure, warm sensations that may be a bit uncomfortable; followed by a cooling sensation.

According to her BET report, the patient says…

This is what all the cool kids are doing, i.e. celebrities and people with money to blow, so of course I had to try it out for myself. On season’s past of Keeeping up with the Kardashians we saw Khloe Kardashian undergo a very different type of body contouring called VelaShape? Treatment.

She asked the doctor about the comparison.

“They are actually very different devices. SculpSure is an FDA cleared device for permanent destruction of fat and can non-invasively cause the same sort of changes you get with liposuction. Velashape temporarily smoothes skin and improves contour, but one would need far more treatments  to be continuously done to maintain benefits,” explained Dr. Akhavan.

At the end, the woman said she suffered NO pain, at all!

Now here’s MY issue with the whole thing. While I am thrilled that this young woman is, what she describes as “basically fit,” the so-called fat she is trying to remove is minuscule to the lot of us who have as I described above, that TIRE around our waist.

Of course I don’t mean to minimize HER issue. But c’mon, don’t we always see images of these already tiny, model-types, saying “look at me now?”

I’m ready to see a 50-plus-year-old woman who had some serious love handles. Mo’ betta! I want her to have a gut; and I want to see this doctor, or any doctor who does this type of non-invasive procedure, do it on her and show the results!

Anyway, back to the woman and her procedure at hand. Here is what she wants you to know via BET.

What You Need to Know About DoubleSculpt by SculpSure:

Watch her entire surgery on the video below and let me know (in the comments section below) if it has convinced YOU to do it.

One thought on “What!? I Can Get Rid of This ‘Tire Around My Tummy’ Without Exercise or Diet? (Watch)”