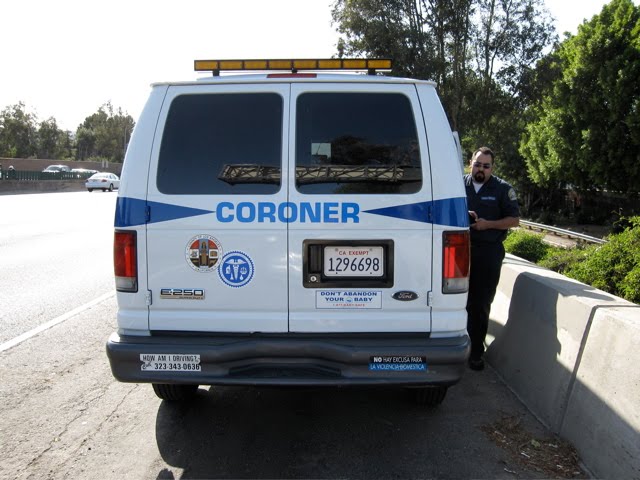 *Imagine you’re dead. OK wait, I started that wrong, imagine you’re driving along, and you’ve swerved the hell out of the van in front of you, trying to get by. The guy driving obviously has some kind of attitude because how could he NOT see you trying to get by? Meanwhile, both lanes to your right and left are bumper to bumper traffic.

But wait! Instant karma has struck that dumb piece of sh*t in front of you because his back door has flung open. Hahahaha!

You’re darn skippy it is. And that big white van belongs to the coroner’s office.

There was a prank about three years ago that this real incident mirrors. But this is no joke. It REALLY happened. And if we find out later that it didn’t, let’s just say that my respect for the Associated Press will dwindle.

In the meantime, if you were anywhere near the intersection of Martin Way East and Phoenix Street Southeast in Washington on Monday, and you wonder what the backup up the street was all about…listen up.

According to The Associated Press, not one, but TWO gurneys fell from the back of a coroner’s truck that was traveling from a home death.

Olympia Police Department Lt. Paul Lower told the press that one of the gurney’s — the most important one (one guess why) was found in the intersection, while the second gurney rolled down the street and was found in a parking lot.

Traffic had to rerouted while the coroner’s office was reached, and came to retrieve the body and reload the gurneys back into the truck.

I’m sure what followed was a… “OK folks. Nothing to see here. Move along.”

The family was notified. I can only imagine the vision in their head.

But thankfully, they were assured that there was “no trauma” to the body.

There is an investigation to decipher exactly what happened.

TRANSPARENT MOMENT: I sure  hope I don’t go straight to hell for the chuckles this incident brought on. I just couldn’t help it.