*New Yorkers, you gotta love ’em. Apparently they’ve seen it all before. It takes a lot to get their attention so just because a guy walked on the train with a big-ass peacock bird…you know the one: about 8-feet tall, beautiful colors, extremely long tail, don’t expect them to actually look up from what they’re doing.

…and that’s OK by the bird. He is awkwardly unfazed as well.

I mean, the only reason I know is because the sight certainly got the attention of one guy named Matt Chayes. He took a photo and tweeted:

Midday on the @NYCTSubway. Guy walks onto a train with this. (Hold on. Wait a minute!)

The collective “we” out here in cyber-land certainly paid attention. Matt’s tweet garnered 25,318 likes and 7,173 re-tweets.

But look, the picture also shows the people on the subway looking like they could give a you-know-what. A man and woman in the forefront are both looking down at  their phones. Even the woman standing by the subway door doesn’t appear to be looking at the unusual site. The brother sitting behind definitely is. Hey, let’s just say we don’t just let mess like this pass us by.

And here’s another kicker — when MTA was made aware of the situation, and shown the photo, look at what they tweeted to Matt.

if possible, can you please provide more details about this incident?

Of course Matt was blown away by the ridiculous response.

?Incident??! Uh, MTA, you have a lot of other things to worry about than dope-as-hell peacocks on the subway.

Fellow Twitter users made a joke of the whole thing. Chiming in to say that no one should ?snitch? on the peacock. They even claimed the peacock had its own Metro Card. 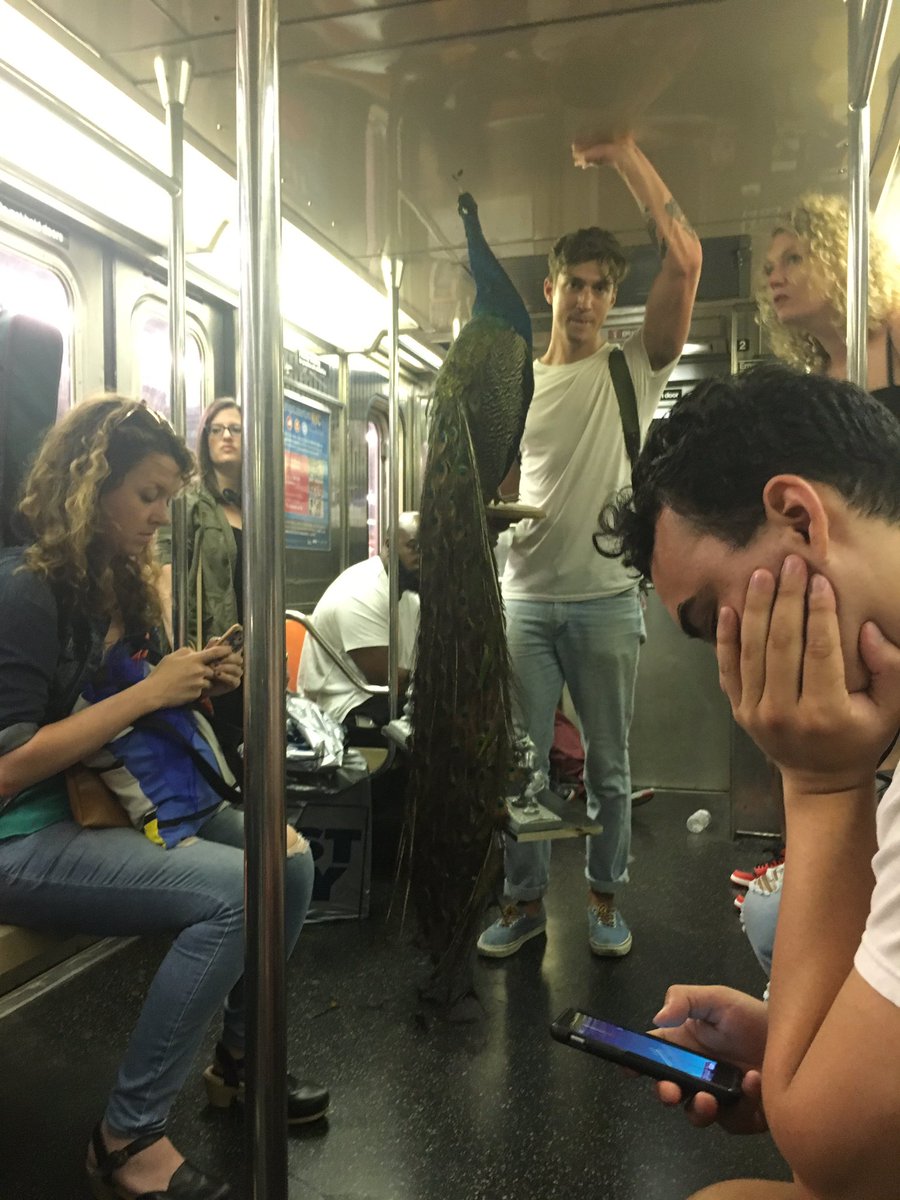 So again, we wondered why this birds’ feathers weren’t ruffled. Why this bird, on a train that makes all kind of loud choo-choo noises; bangs against the walls as it travels through tunnels (if you’ve ever rode a NYC subway, you know what I mean!), and is poised on the arm of this man while a bunch of humans sit around doesn’t seem to be moved at all.

The reason why, my friends, is one you may not expect. No, the bird is not on a time out. At least not as we know it.

The man holding this intrepid peacock is Reid Watson, who refers to himself as the ?MTA Peacock Guy,? and is known as BarFreddys on Reddit.

He noted that the peacock is not just any peacock. It?s a mascot.

Now before you go thinking he spreads that beautiful tail as he leads some parade or something, stop right there.

The bird is a TAXIDERMIED mascot!!!

For those of you who didn’t click on the word, and still may wonder what that means (hey, I’m not trying to be insulting, some folks may not know)…It means the bird is dead. Stuffed.

?It?s the mascot of a bar I run in Tribeca called Weather Up,? Reid wrote in a Reddit post. ?The owner Kathryn is the blonde woman to right of me, she?s the owner of the peacock.”

Reid invites folks to “come to the bar for a beer.?

One thought on “Man Gets on NYC Subway With Huge, But Way-Too-Cool-Acting Peacock”