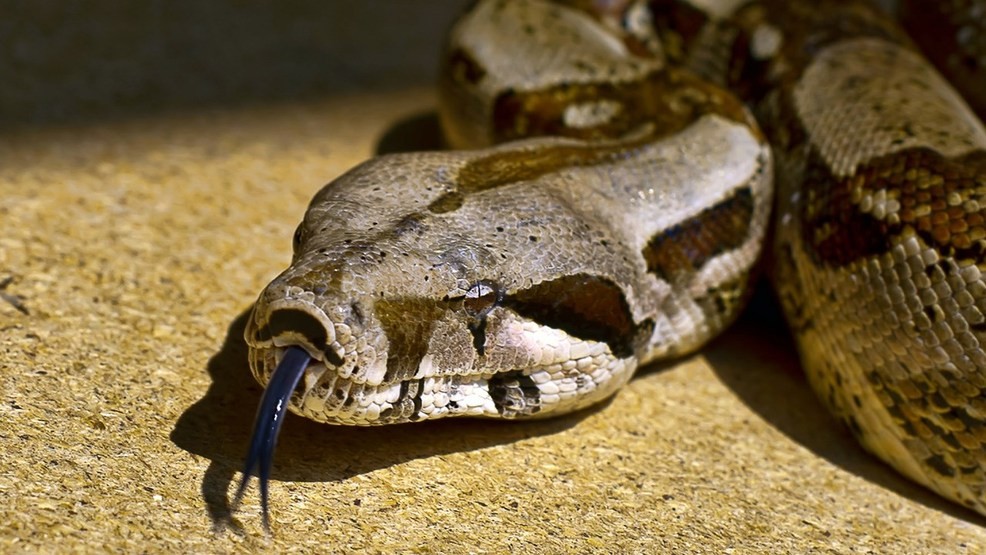 *Some people think they can just get away with anything, unscathed. Hey, everybody knows I just love animals. But with this story I realize even I have a limit. An Ohio woman called 911 (scroll down to listen) and told them to “Hurry!” because she had a “Boa constrictor stuck to my face!”

No sh*t. That’s what she said.

Now before we go any further I will admit: I was young and stupid once. I actually let someone place a boa constrictor (a friend’s pet) around my neck. His name was “Dylan” — you may have heard this story before, because its not the first time I’ve told it.

Matter of fact, I even baby-sat, er, snake-sat the 8-ft reptile while my friend ran errands. She kept him in one of those big glass cases you see in jewelry shops. Dylan was cool. Accustomed to being around people — this girl was an artist. And he was fast. I had always thought huge snakes were too heavy to be fast, but I was wrong!

Dylan would glide around the perimeter of a room like nobody’s business. OMG and he was sneaky. He’d hide in drawers and shit, I’m told.

Years later, I guess Dylan outgrew being anybody’s pet and ended up biting my friend on the arm.

Like I said: I was young and stupid once. Wouldn’t do that today.

But what’s this old dame’s excuse?

Even the 911 operator had to repeat the statement: “You have a boa constrictor on your face?” in that usual deadpan “what’s YOUR story” voice.

But still, you could hear the disbelief.

The operator can also be overheard in the background admitting, “I’ve never heard that before.”

The still unidentified woman had apparently rescued 11 snakes the day before.  This boa, who she decided to keep as a pet, had latched onto the poor woman’s nose and wouldn’t let go. What the hell was she doing? Holding it up high and talking baby talk to it? Reminds me of the dumb ass woman who saw a snake in her garden; stands over it and says, “Hey mister snake…I’m just going to touch you on the tail and see what you do,” and had the audacity to be surprised at the outcome.

Did I already say, some people?

But back to this Ohio woman. When help arrived she was said to be lying in her driveway in a pool of blood. Thank goodness she’s alive, and was taken to the hospital where she was diagnosed with no life threatening issues.

Bet you’re wondering how they got that snake off her nose.

They had to use a pocket knife to cut off its head.

OK. Back up a minute. Wasn’t its teeth still embedded in her nose though?

I know. Gross. But remember that story about the chef in Asia who had chopped off a snake’s head, only to be killed by it minutes later?

I get the impression you guys think I’m lying sometimes!

Now undoubtedly there are some snake lovers out there who don’t think killing this snake was totally necessary.

I feel you. I felt that way when our gardener caught the snake in our yard. Hell, I’m still traumatized by the sight of that dead snake being lifted from the bushes.

But according to what Sheffield Lake Fire Lt. Wes Mariner told Cleveland.com, they had no choice.

?Because of how close it was wrapped around her, there were no other options, from what I understand.?

One thought on “Watch: Think You Got ‘Issues?’ This Woman Called 911 Because A Boa Constrictor Was Around Her Neck!”