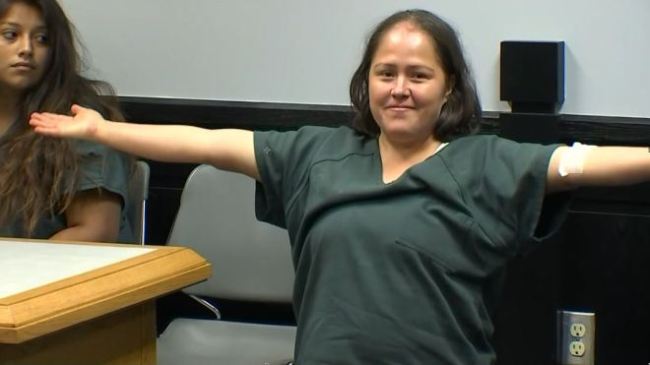 Isabel Martinez, we shudder to think what you believe you are mimicking here.*“What prompts a person to take the life of such innocent children and her spouse is something we may never understand,” is the statement that came from the Gwinnett County Police Department on Thursday.

“This is a horrendous crime not only for the victims but for the extended family, neighborhood and community,” it concludes. The statement is in response to the crime committed by 33-year-old Isabel Martinez, who is charged with  five counts of malice murder, five counts of murder and six counts of aggravated assault in the stabbing deaths of her children: 10-year-old Isabela Martinez, 7-year-old Dacota Romero, 4-year-old Dillan Romero, 2-year-old Axel Romero; and their dad, 33-year-old Martin Romero. One child, Diana Romero, the 9-year-old daughter of the woman, survived the attack, but she is hospitalized in serious condition.

The bodies of the deceased was found in the Emory Lane home after an unidentified woman called 911 from inside to report a stabbing on Thursday at 4:47 a.m. ET.

According to what Cpl. Michele Pihera of the Gwinnett County Police Department told ABC News, it was later learned that Martinez had made the call.

No audio of the call has been released yet.

In the 9-plus minutes YouTube video below, which incorporates three different news reports, Martinez’s bizarre behavior is an insult to mental illness; so we won’t even go that route. This convicted murderer of her own family is seen giving photographers a double thumbs up; smiling for the cameras, bowing and gesturing throughout as the judge speaks. In the first video, during her first court appearance, the judge admonishes Martinez’s antics and tells her to stop. 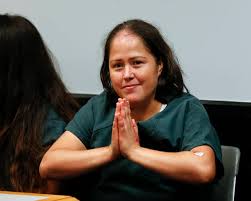 Martinez is a native of Mexico and speaks through an interpreter.

The judge asks her if she is financially able to secure a lawyer. When she says no, through her interpreter, she is asked if she would like a court-appointed attorney. Her “No!” to this offer is emphatic. An obviously confused judge probes deeper and even through her attorney you can tell this woman ain’t [sic] wrapped too tight and she rambles. The short version of this rambling however, as to why she feels she doesn’t need professional representation is, “The people and her faith” are her attorneys.

Jim Hollandsworth, co-founder of The Path Project, a nonprofit that runs an after-school program that Martinez’s children participated in, said the Spanish-speaking family had moved to the largely Hispanic neighborhood just a few months ago.

“The kids were fantastic kids,” Hollandsworth told ABC affiliate WSB-TV in an interview on Thursday. “They had tons to live for and a future ahead of them, so it’s awful and devastating.”

Though its true that we will probably never know what it is that makes a parent turn on their children in this way, I was also surprised to learn that such a young woman is mother…was mother…to five children.

It will be interesting to hear from more people who actually knew this family; to learn more about their lives and if there were any “sign” that were missed. I also know you join us in praying for little Diana to pull through. Though I can’t even imagine what her frame of mind will ever be again.

Watch Isabel Martinez and her antics in court in the YouTube video below.

One thought on “The Posture of a Mother and Wife Accused of Killing Her Family: All Smiles and A Double Thumbs Up!”