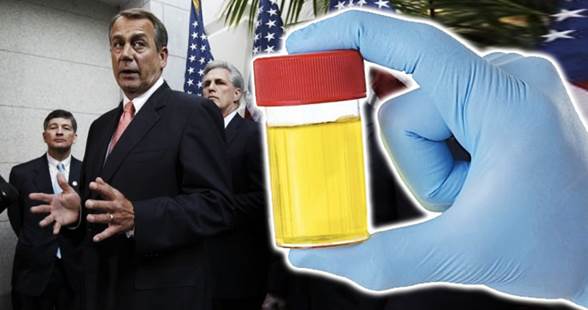 *With all the crazy mess coming out of the Big House these days, is it any wonder why Americans are requesting drug tests for Congress members? Let me answer that for you: No!

Amidst their latest profiling strategy, Congress is requesting that people receiving food stamps be drug tested. Now I’m way ahead of you in thinking, what the phuck does one thing have to do with the other? They do realize the answer to that question is not a damn thing, right?

Now these same “recipients” are among those saying, “We will, if YOU will!”

A Countercurrent News report states that a YouGov poll found that 78% of U.S. citizens are in favor of requiring random drug testing for members of Congress. A full 62% said they ?strongly? favor this, compared with only 51% who feel the same way about food stamp and welfare recipients.

The support for this move was bipartisan, as 86% percent of Republicans, 77% of Democrats and 75% of independents support the mandatory drug tests for members of Congress.

Personally, I feel this makes even more sense seeing as members of Congress have greater responsibilities; in that they are responsible for making decisions that have a great impact society. Can we say the same for those who receive food stamps?

The news report goes on to say, It would seem that more Americans aren?t worried about drugs, they are upset with the hypocrisy of U.S. lawmakers, who carry on this charade of a ?War on Drugs? while using the very things they pass laws against.

In a “Thous doth protest too much” [Shakespeare’s ‘Hamlet’] kind of way, the saying that those who seem to balk the loudest are generally trying to cover up or divert attention from an even bigger issue. Notably, Kentucky Senator Mitch McConnell, who is known as the  ?Anti-Drug Senator? has now been linked to a cargo ship that was recently stopped and searched before departing from Colombia. The Coast Guard found approximately 90 pounds of cocaine on board.

The diversion…Don’t look that way! Now Senator McConnell wants to turn your attention to his stance against legalized marijuana.

He recognizes, according to the aforementioned news reports, the drug is ?not in the same category as heroin,? even if it is treated as such by the DEA. Yet and still he says that legalizing the plant could ?completely transform your society in a way that I think certainly most Kentuckians would not agree with.?

McConnell states, ?I don?t think an answer to this, honestly, is to go in a direction of legalizing any of these currently illegal drugs. This whole movement in various parts of the country is a big mistake.?

The irony about this whole thing stems from an incident back in November; where drugs found on the ship, the Ping May were carried by the vessel operated by The Foremost Maritime Corporation; a company owned by Mitch McConnell?s in-laws, the Chao family.

Free Thought explained that ?this connection is not only relevant because of the family connection, but also because the Chao family has often made large donations to McConnell?s campaigns.?

?In fact,? they continue, ?the Chao family has been funding McConnell since the late 1980s. Years later, in 1993, McConnell married Elaine Chao and secured the Chao family as one of his primary sources for investments.?

One thought on “‘Pee in This Cup’: Americans Request This of Congress Members to Prove THEY’RE Not on Drugs”