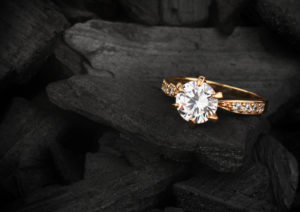 One diamond owner in the United Kingdom is about to get very lucky.

Back almost 30 years ago, the owner bought a diamond ring from a garage sale in London for the equivalent of $13 USD. They mistook the diamond for costume jewelry, and only just found out that it is actually worth thousands. In fact, it is set to go up for auction soon and is hoping to fetch around $45,000 thousand, or ?350,000.

The story of this diamond is a pretty remarkable one. The owner has worn this dazzling gem almost every day, completing chores, shopping, and bathing, and had no idea what was under her nose until a jeweler approached her and mentioned it could hold real value.

That’s because the diamond is from the 19th century, and back then diamonds were not traditionally cut to showcase their brilliance as they are today. A typical diamond’s value is measured by the 4Cs; cut, color, clarity, and carat, but in the 19th century the focus was more on the weight of the gem rather than how it sparkled.

This diamond, in particular, was cut into a coffin shape, which is slightly duller and gives a deeper cast to the gemstone.

The owner, whose name has not been made public, brought her piece to Sotheby’s –an art auction dealer in London– for an appraisal. The head of Sotheby’s jewelry department, Jessica Wyndham explains to The Guardian that the company was unaware of how to test the gem so they sent it to the Gemological Institute of America.

When there, geologists discovered that the 26.27 carat diamond was authentic, much to everyone’s surprise. The owners decided to put it up for auction, but first, the gem will be re-cut by a master diamond cutter to maximize brilliance and make it a bit more sparkly.

Above anything else, Wyndham believes that this $13 dollar discovery is now becoming a life-changing asset. She explains that the owners ?incredibly excited. Anyone would be in this position. It?s a life-changing amount of money. No matter what your background is or what your past experiences have been, it?s going to revolutionize someone?s life.”

Truly, a diamond in the rough.