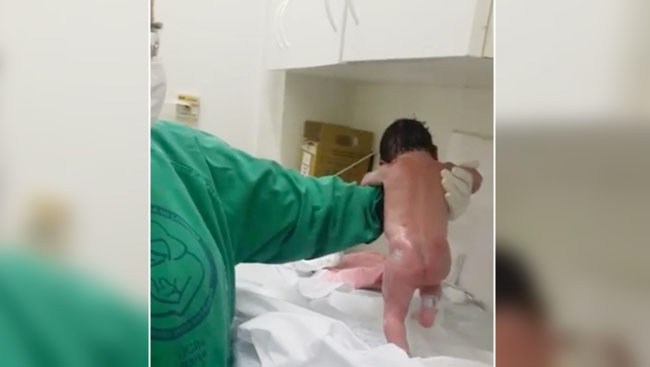 *Look, a new baby is in our household as of six-weeks ago, and as strong as I can see that she is — there is no way I could even imagine her walking, or stepping, or whatever the infant in the  video below is doing.

In a video believed to be shot at Santa Cruz Hospital in Rio Grande do Sul, southern Brazil, doctors were apparently attempting to bathe a newborn when she decided, nuh-uh, I’ve had enough of this already and began to wriggle her way out of their arms to stand up…

I know. I know. The nurses said we wouldn’t believe it, so whoever shot this video (scroll down) knew what they were doing.

Now think about it, babies don’t generally start walking before 12 months; though some have started a few weeks earlier. One Portuguese nurse watching the child exclaimed, ?Oh my gosh, the girl is walking. Good gracious.?

?Ju, Ju, come and see this? another colleague shouted.

A midwife prayed: ?Merciful father. I was trying to wash her here and she keeps getting up to walk. She has walked from here to here.?

But let’s slow our roll, according to one of the midwives this amazing incident is not so rare after all.

Known as the walking or stepping reflex, ?if you hold the baby under the arms (being careful to support her head, as well) and let her soles touch a flat surface, she?ll place one foot in front of the other and ?walk?,? Healthy Children writes.

?This reflex will disappear after two months, then recur as the learned voluntary behavior of walking toward the end of the first year.?

The walking reflex is part of what are known as ?primitive reflexes?. It?s an infant?s nervous system kicking in before the mind or the body has grown to understand or cope with what is going on around them.

Check out the video and let us know what you think!

One thought on “OMG! This ‘Newborn’ Appears to Walk…And She Just Came Out of the Womb (Watch)”