*Disrespect doesn’t look any clearer than this. About a hundred or more teens, the majority of whom appear to be Black, attended a pool party in Florida. It’s not too difficult to assume that the music was most likely loud; nor is it unlikely that a neighbor would come over to ask if it can be turned down.

That’s being nice because in my day, the cops would just show up at the door.

Enter Nancy James, a 68-year-old white woman who walks with a limp. She is somewhat associated with the property and is said to have come over not to end the party, but to ask if the DJ could turn the music down.

Things didn’t go well, and there’s a video to prove it.

The video shows James speaking with some of the teens. You can see her motioning with her arms for something, presumably the music, to be lowered. People say that she was polite and even warned the teens that the cops were coming.

You can also hear something else. People chanting “throw her in!” on the sidelines. Then you see a guy in a red shirt come and pick James up from below the waist — presumably to fling her into the nearby pool. But he falls down on the cement, taking her with him.

The fall looks frightening enough considering her age. But dude quickly gets up and drags her to the pool, then throws her in.

The video was shown to a young neighbor who actually knew James and she was mortified.

Neighbors says James had recently had hip surgery; and has survived several strokes. 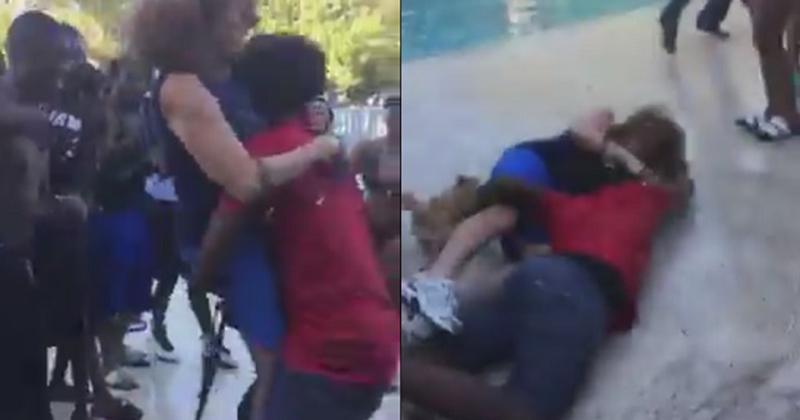 The media went to James’ door for a comment, but all she would say at the time was that she was not talking until she finished speaking with the police.

Related: Nancy James tells WIAT/CBS “The kid’s just not evolved yet into what you should be as a human being.”

UPDATE: The young man who threw Nancy James into the pool turned himself in. Police reports say he commented, “I messed up and I need to own it.”

Some might say owning up to it is admirable, but it doesn’t take away from the act itself. What do you think restitution should be? You can’t just go around throwing elderly people in pools.

I think the young man should be required to spend some time assisting the elderly in a home. You?

Watch the Fox4 video below.

4 thoughts on “Watch: Elderly Woman Thrown Into Pool At Teen Party in Florida…Teen Turns Himself In to Police”